The Myxomycetes (zool.: Myxogastrea) are by far the largest group of slime moulds, comprising some 800 species in 62 genera.
These are the familiar slime moulds so common on moist, decaying wood and other organic substrata. They are also abundant in soil and may fulfil ecological functions which are as yet poorly understood.

The vegetative phase is a free-living plasmodium, i.e. a multinucleate wall-less mass of protoplasm. This may or may not be covered by a slime sheath. Plasmodia vary in size and can be loosely grouped into three categories.

(1) Protoplasmodia are inconspicuous microscopic structures usually giving rise only to a single sporangium. They resemble the simple plasmodia of protostelids. 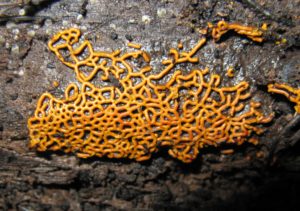 (2) Aphanoplasmodia (Gr. aphanes=invisible) are thin open networks of plasmodial strands. The aphanoplasmodium is transparent, with individual strands only 5-10mm wide and the entire plasmodium about 100-200mm in diameter. Most aphanoplasmodia are only seen with the aid of a dissection microscope. 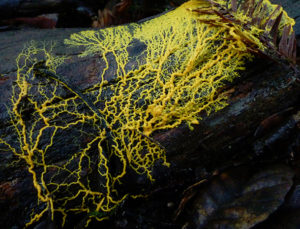 (3) Phaneroplasmodia: (Gr. phaneros= visible) are large sheets or networks with conspicuous veins within which the protoplasm shows rhythmic and reversible streaming, each pulse lasting about 60-90s

The  Physarum polycephalum, a typical myxomycetes, the plasmodium is diploid and feeds by phagocytosis of bacteria, yeasts or fungal mycelia or spores. It gives rise to a sporophore under appropriate conditions. The haploid spores are dispersed by wind or insects and, depending on environmental conditions such as moisture, germinate by releasing either amoebae or zoospores (swarmers) with usually two anterior whiplash flagella, of which one is shorter than the other and is thus often invisible.

The amoebae are called myxamoebae, in order to distinguish them from the amoebae of cellular slime moulds which have a different function in the life cycle. Myxamoebae are capable of asexual reproduction by division. Swarmers cannot divide, but can readily and reversibly convert into myxamoebae. Under adverse conditions, myxamoebae secrete a wall to form microcysts. Both swarmers and myxamoebae form filose pseudopodia with which they engulf their prey.

is initiated when two haploid myxamoebae or swarmers of compatible mating type fuse to form a zygote from which the diploid plasmodium develops. The plasmodium can survive adverse conditions by turning into a resistant sclerotium in which numerous walled compartments (spherules), each containing several nuclei, are formed. Upon resumption of growth, the protoplasts emerge from their spherules and fuse to re-establish the plasmodium. When sexual reproduction ensues, the entire content of a plasmodium is converted into one or more sporangia in which meiosis takes place. Beneath the developing sporangia, the plasmodium deposits a specialized layer, the hypothallus, which is very variable in form (disc-like, membranous, horny or spongy).

In P. polycephalum, sexual reproduction is triggered by environmental factors such as starvation and light, and by chemical factors. Depending on species, the sporophores may take a range of shapes. Intermediates between these different types of sporophore are possible. The most common form is the sporangium, a vessel enclosed by a wall (peridium) within which the spores are contained. Protoplasmodia produce only one sporangium each, but numerous sporangia may arise from phaneroplasmodia. Sporangia may be stalked or sessile. A second common sporophore is the aethalium (Gr. aethes=irregular, curious, unusual) in which the entire plasmodium becomes converted into a hemispherical or
cushion-shaped structure. This can comprise several sporangia, but these have usually lost their structural identity and are surrounded by one common peridium. In a pseudoaethalium, several sporangia are grouped together but are still recognized as structurally distinct. In the plasmodiocarp, the protoplasm accumulates in the main veins of the plasmodium, and spores are produced there. 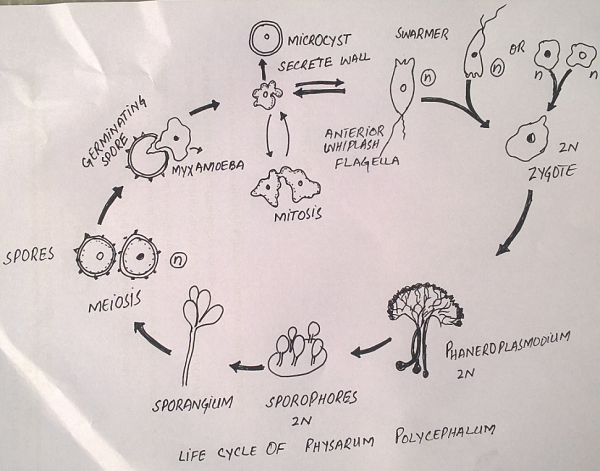 Physarum polycephalum as an experimental tool:

This species has been used to investigate several aspects of cell biology. The conspicuous cytoplasmic shuttle streaming in the veins of its large phaneroplasmodia is a fascinating phenomenon and has been examined extensively. The pulse is caused by actin myosin interactions controlled by Ca2+
Mitotic division of all nuclei throughout the plasmodium of P. polycaphalum occurs in a synchronized manner, and Physarum was one of the pioneer organisms in which the existence of the cell cycle was demonstrated. Synchrony of mitosis is regulated by a protein kinase which catalyses the phosphorylation of H1 histones, leading to the condensation of chromosomes at the onset of mitosis.