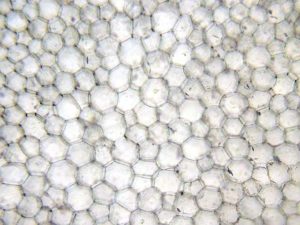 The term parenchyma refers to a tissue composed of living cells variable in their morphology and physiology, but generally having thin walls and a polyhedral shape, and concerned with vegetative activities of the plant. The individual cells of such a tissue are parenchyma cells. The word parenchyma is derived from the Greek para, beside, and en-chein, to pour, a combination of words that expresses the ancient concept of parenchyma as a semiliquid substance “poured beside” other tissues that are formed earlier and are more solid. Parenchyma is often spoken of as the fundamental or ground tissue. It fi ts this defi nition from morphological as well as physiological aspects. In the plant body as a whole or in its organs parenchyma appears as a ground substance
in which other tissues, notably the vascular, are embedded. It is the foundation of the plant in the sense that the reproductive cells (spores and gametes) are parenchymatous in nature. Inasmuch as the presumed ancestors of plants consisted entirely of parenchymatous cells. parenchyma may be considered the phylogenetic precursor of all other tissues. This tissue is the principal seat of such essential activities as photosynthesis, assimilation, respiration, storage, secretion, and excretion—in short, activities depending on the presence of complete living protoplasts. Parenchyma cells that occur in the xylem and phloem play
an important role in the movement of water and the transport of food substances. Developmentally, parenchyma cells are relatively undifferentiated. They are unspecialized morphologically and physiologically, compared with such cells as sieve elements, tracheids, and fi bers because, in contrast to these three examples of cell categories, parenchyma cells may change functions or combine several different ones. However, parenchyma cells may also be distinctly specialized, for example, with reference to photosynthesis, storage of specifi c substances, or deposition of materials that are in excess in the plant body. Whether they are specialized or not, parenchyma cells are highly complex physiologically because they possess living protoplasts.

Characteristically living at maturity, parenchyma cells are able to resume meristematic activity: to dedifferentiate, divide, and redifferentiate. Because of this ability, parenchyma cells with only primary walls play an important role in wound healing, regeneration, the formation of adventitious roots and shoots, and the union of grafts. Furthermore single parenchyma cells,
having all the genes present in the fertilized egg, or zygote, have the ability to become embryonic cells and then, given proper conditions for growth and development, to develop into an entire plant. Such cells are said to be totipotent. The goal of workers
involved with plant multiplication, utilizing tissue culture methods, or micropropagation, is to induce individual cells to express their totipotency