The two long-distance transport pathways—the phloem and the xylem—extend throughout the plant body. The phloem is generally found on the outer side of both primary and secondary vascular tissues. In plants with secondary growth the phloem constitutes the inner bark. 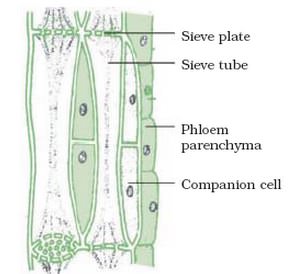 The cells of the phloem that conduct sugars and other organic materials throughout the plant are called sieve elements. Sieve element is a comprehensive term that includes both the highly differentiated sieve tube elements typical of the angiosperms and the relatively unspecialized sieve cells of gymnosperms. In addition to sieve elements, the phloem tissue contains companion cells (discussed below) and parenchyma cells (which store and release food molecules). In some cases the phloem tissue also includes fibers and sclereids (for protection and strengthening of the tissue) and laticifers (latex-containing cells). However, only the sieve elements are directly involved in translocation.
The small veins of leaves and the primary vascular bundles of stems are often surrounded by a bundle sheath, which consists of one or more layers of compactly arranged cells. 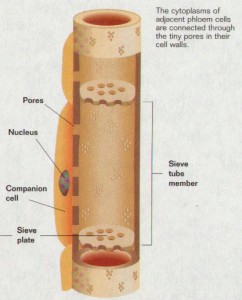 Early experiments on phloem transport date back to the nineteenth century, indicating the importance of long distance transport in plants. These classical experiments demonstrated that removal of a ring of bark  around  the  trunk  of  a  tree,  which  removes  the phloem, effectively stops sugar transport from the leaves to the roots without altering water transport through the xylem. When radioactive compounds became available, radiolabeled 14CO2 was used to show that sugars made in the photosynthetic process are translocated through the phloem sieve elements.

Many structures normally found in living cells, even the undifferentiated cells from which mature sieve elements are formed. For example, sieve elements lose their nuclei and tonoplasts (vacuolar membrane) during development. Microfilaments, microtubules, Golgi bodies, and ribosomes are also absent from the mature cells. In addition to the plasma membrane, organelles that are retained include somewhat modified mitochondria, plastids, and smooth endoplasmic reticulum. The walls are nonlignified, though they are secondarily thickened in some cases.

Thus the sieve elements have a cellular structure different from that of tracheary elements of the xylem (which are dead at maturity), lack a plasma membrane, and have lignified secondary walls.

There are at least three different types of companion cells in the minor veins of mature, exporting leaves: “ordinary” companion cells, transfer cells, and intermediary cells. All three cell types have dense cytoplasm and abundant mitochondria.

Transfer cells are similar to ordinary companion cells, except for the development of fingerlike wall ingrowths, particularly on the cell walls that face away from the sieve element. These  wall  ingrowths  greatly increase the surface area of the plasma membrane, thus increasing the potential for solute transfer across the membrane.