Genus Penicillium belongs to Ascomycetes group of fungi and is well known for its importance in antibiotic (penicillin) and food (cheese, meet products) industry. The name Penicillium is derived from the latin word “penicillus” meaning brush, which refers to a stalk bearing radiating chains of conidia resembling a broom. Penicillium produces typical asexual fruiting structures with brush like head. The stalk of the fruiting body is known as conidiophore. Conidiophore branches at the tip and is terminated by a whorl of branches known as metullae. Each metulla finally terminates into a tuft of uninucleated, bottle shaped branches termed as phialides. A chain of spherical or ovoid spores is formed from the tip of each phialide. The spores are also known as conidia (singular-conidium) or phialospores. These spores often contain blue or green pigments which give the colonies their characteristic colour. So, the penicillia are also called blue-green molds.

This is a saprophytic fungus and usually grows upon rotten vegetables, rotten fruits, rotten meat and many other moist and dead organic substrata. Majority of the species of this genus are harmful and cause sufficient damage to the vegetables and fruits, but some of the species are very useful.

The cottony net-like mycelium is found upon the surface of the substratum. The hyphal 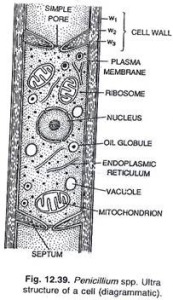 ends penetrate the substratum and absorb food material. The mycelium is profusely branched and septate. The cell walls are thin and the cells are binucleate or multinucleate. In certain species of Penicillium the sclerotia are produced.

Structure and development of conidia:

The conidia are tiny, uninucleate, spore like structures which may be globose to avoid in form. The spore wall is pigmented and is differentiated into two layers, an outer thick, ornamented layer, the exine; and inner smooth and thin layer, the intine. The conidia are detached from the conidiophores and are carried by wind to a suitable substratum where they germinate by forming a germ tube. The germ tube elongates, becomes septate to form a new hyphae. 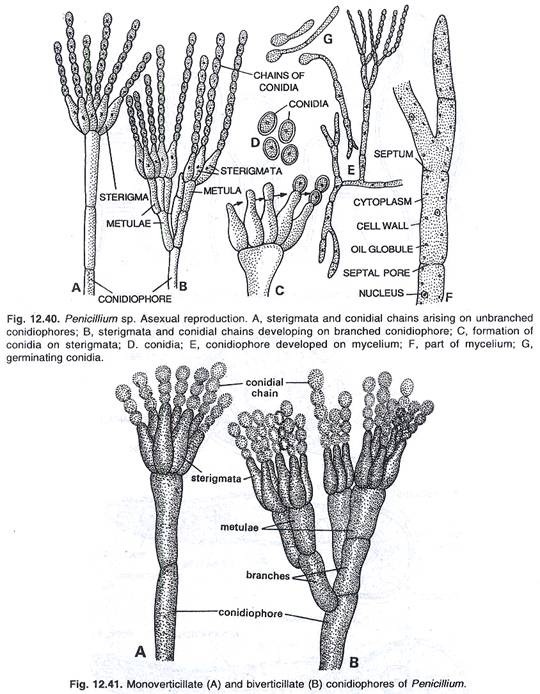 The perfect state of Penicillium is assigned to two different genera, the Eupenicillium and Talaromyces. All the species are homothallic. In Penicilllium vermiculatum the sexual reproduction is oogamous. The male sex organs are antheridia and female sex organ are ascogonia.

A mature ascogonium is a long erect, multinucleate, tubular structure with curved upper end. It arises from uninucleate, septate hyphae as a finger like, lateral outgrowth which elongates into an ascogonium. The nucleus of the ascogonium divides many times mitotically to produce 32 or 64 nuclei.

Development of Ascus and Ascospores:

The stimulus of plasmogamy results in septation of ascogonium into binucleate cells. Some of these segments usually those present in the middle, produce outgrowth called ascogenoum which develop into ascogenous hyphae composed of binucleate cells. The tip cells of these hyphae act as ascus mother cells which develop either simply by elongation, or by crozier formation into ascus. Karyogamy takes place in the ascus mother cell and this diploid uncleus undergoes meiosis to produce four haploid nuclei. A mitotic division results in the formation of eight haploid nuclei. These are transformed into ascospores by free cell formation. The ascus are globose or pear-shaped and the unicellular, uninucleate and lens-shaped with a groove around the edge 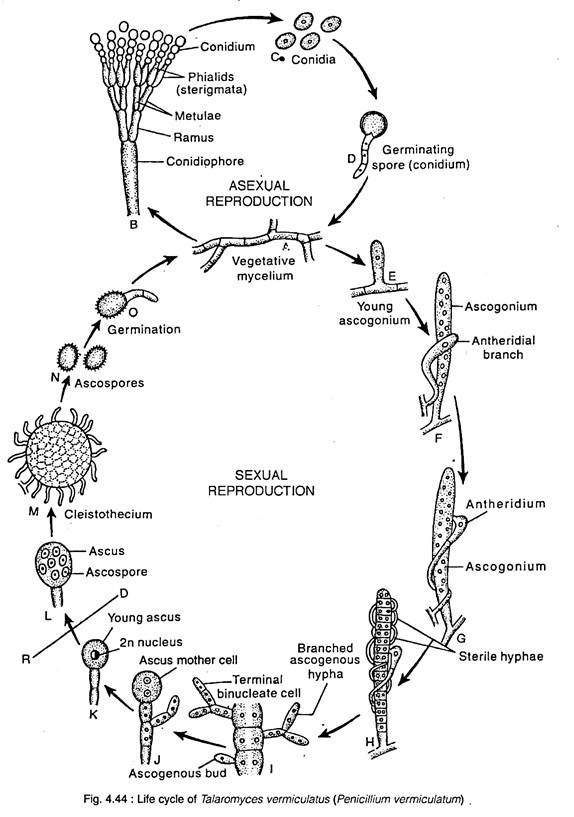