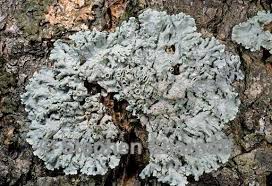 Physcia is foliose lichen.
Physcia is divided into four regions internally. These regions are:

1. Upper cortex: It is present at the upper regions. It is composed of closely packed hyphae. Spaces are absent between them. If spaces are present, they are filled by gelatinous material. The upper surface may be smooth or it has hair like structures. These hairs are formed by scattered hyphae above the cortex.

If the algal components are scattered irregularly among the fungal hyphae. Then the thallus is called homoiomerous. If they are restricted to a single layer, then it is called heteromerous.

Cephalodia: Gall like outgrowth is formed on certain thalli. These galls are composed of both fungal and algal cells.

Vegtative reproduction takes place by soredia formation. Soredia are small  bud like outgrowths formed on the surface of thallus. Soredia are composed of rt.any algal cells with few fungal hyphae. The:’ may be present in patches called sorelia. Soredia are detached. They are dispersed by wind.

in Physcia takes place by pycnospores formation. These spores are formed inside the flask shaped cavity called pycnidia.

Spermatangia are flask shaped. These are embedded on the upper surface of the thallus. Spermatangium opens out side by an astiole. Many spermatia are formed in the inner surface of permenatangia.

Fertilization: Spermatia are discharged form the spermatangia. They fall on trichogyne. Wall is dissolved between two. The contents of spermatium are transferred into trichogyne. Plasmogamy occurs. After that ascogonium produce ascogenous hyphae. The hyphae produce characteristics fruiting bodies apothecia. Ascogenous hyphae produce asci inside the apothecia. Some sterile hyphae among the asci form paraphyses. Karyogamy occurs. It produces zygote nucleus. Zygote divides by meiosis. Then each cell divides by mitosis. Thus each ascus contains eight ascospores.

The peridium of apothecia also contain algal component. Ascospores are dispersed by wind.

Germination of ascospore: The ascospores germinate to produce hyphae in all directions. Some of its branches come in contact with the alga. They form many branches and surround the algal component. More hyphae are formed. It produces characteristic thallua of Physcia.