Pinnularia is a fresh water alga. It is found in pond. It is also present on the moist soil 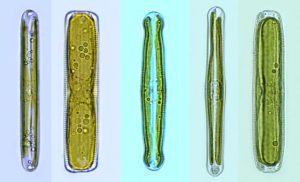 It is unicellular. Its cell is elongated and elliptical.

Cell wall is chiefly composed of pectic substances. Silica is impregnated in it. Therefore, their wall becomes very hard. Cell wall is composed of two halves called valves. These halves overlap like Petri dish. The margins of the two valves are covered by a connecting band called cingulum.
The two valves with their inner protoplasts are called frustule. The frustule has two views. The surface view is called valve view and band view is called girdle view.
The outer larger valve is called epitheca. The smaller inner valve is called hypotheca.

is covered by mucilaginous layer. The surface of valve has minute pores or pits. It produces characteristic markings on the surface of valves. These markings are bilaterally symmetrical. The marking free area is called axial field. The markings are arranged in linear rows. The axial field contains a longitudinal slit called raphe. The raphe is not continuous throughout the length of the valve. The raphe is wedge shaped in transverse section. It has circular thickening called central nodules in the centre. Similar thickening also present at the outer ends of raphe. These are called polar nodules. These nodules open to the external aqueous medium. 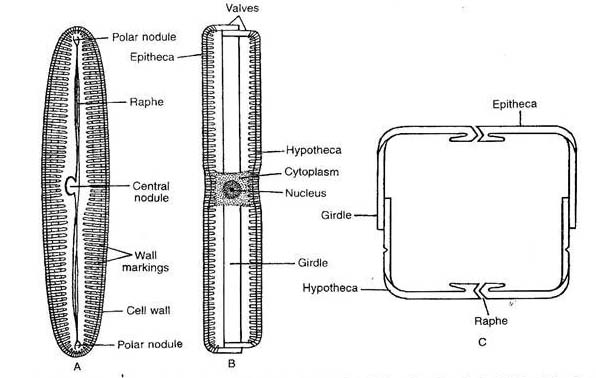 Cytoplasm is arranged in parietal layer. A large central vacuole is present inside the cell. Single nucleus is suspended in the centre of vacuole by transverse cytoplasmic bridge. Two chloroplasts are present along the two sides of the cells. These are most prominent structures.
They contain chlorophyll a, c, beta-carotene and diatomin or fucoxanthin pigment. Fucoxanthin gives the alga characteristic color. One or two pyrenoids are present in the chloroplast. But they do not synthesize starch. Their storage compound is oil or chrysolaminarin.

Locomotory organs are absent in Pinnularia. It moves by chmacteristic gliding movements. Circulation of the streaming cytoplasm within the raphe causes this movement. Mucilage helps in this gliding.

It is the most common method of reproduction. It produces daughter cells slightly different in sizes. Vegetative reproduction in diatoms occurs by simple cell division.

The protoplast expands.
It causes slight separation of epilheca and hypotheca.
Nuclear.division occurs by mitosis and cell divides into two parts.
Each half receives one half of the parent cell.
It synthesizes new valve.
New valve is fit into the parent valve.
Thus new valves are always smaller than the parent halves.
Thus one generation gradually become smaller in size.
It reacted to minimum size.
Then its size is restored by auxospore formation.
But second generation remains of same size.

There are two methods of auxospore formation:

In some species of Pinnularia, two cells from common parent or different parents envelope in a common mucilaginous sheath.
The nuclei of both cells divide by meiosis to form four nuclei.
Three nuclei disintegrate. The fourth one enlarges.
Its protoplast metamorphosed into gamete.
The gametes are liberated from the parent frustules.
They fuse to form zygote. The zygote enlarges and form auxospore. The auxospore secretes new wall and become adult.