The genus Pinus has about 90 species. It has world wide in distribution. They are mostly present in the temperate regions. Four species of pinus are found in Pakistan: Pinus wallichiana; Pinus halepensis; Pinus roxburghil; Pinus gerardiana.

The plant body is sporophyte. It is an evergreen tall tree. Plant body is divided into root, stem and leaves Stem: The main trunk is unbranched. It has branches confined to the apical region. These branches form a characteristic canopy. It is covered with a scaly bark. Its branches are dimorphic. 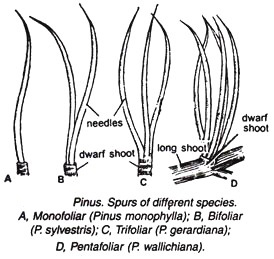 (a) Scale leaves: The scale leaves are small, membranous and brownish in colour. These are protective in function. They are present on the main and dwarf shoots.

(b)Foliage leaves: The foliage leaves are green and needle-like. They are found only on the dwarf shoots forming the spur.

Roots: Pinus has a well developed tap root. It remains short and grows on hard ground or rocks. The lateral roots are well developed. These roots spread over a large area. Young roots are infested with a fungus to form mycorrhizae. 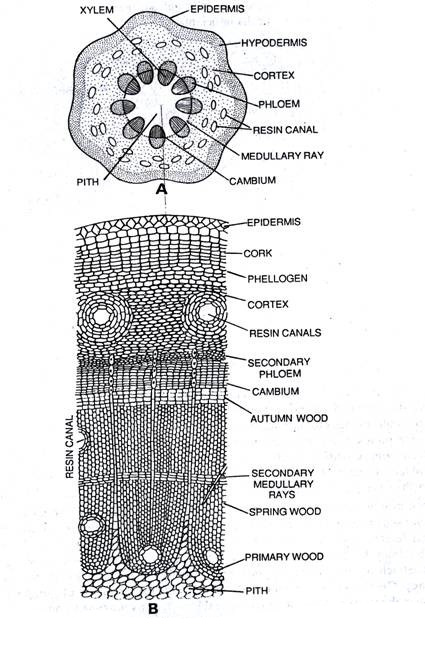 Fig: TS of stem of pinus

Internal Structure of the Stem

A transverse section shows following internal parts of the leaf: 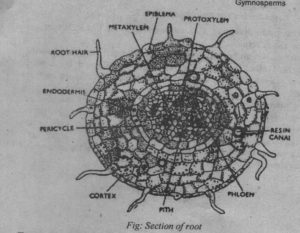 young root is di- to pentarch. Xylem bundles are Y-shaped. Siwtil parenchymatous pith may be present or absent in the centre. The ring of vascular bundles is surrounded by two to three layered pericycles. Pericycle is surrounded by endodermis. The cortex consists of a few layers of thin walled parenchymatous cells. Root hairs may be present or absent. Roots may be covered by mycorrhizal fungus.

Pinus is monoecious. Plant develops both male and female strobili on the same plant. The strobili are monosporous. There is no vegetative reproduction in Pinus. 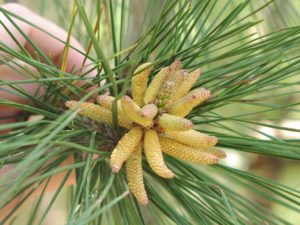 The male cones are much smaller. They are produced in clusters near the tip of the long shoots. The male cones are produced in the spring. Each male cone has a central axis. It bears a number of spirally arranged microsporophylls or stamens. Each microsporophyll has sac like microsporangia (pollen sacs) on the ventral side. Each microsporangium produces a large number of microspores (pollen grains). The wall of each microspore (pollen grain) consists of an inner intine and an outer exine. It has balloon like wings. The wings help in the dispersal of spores by wind. 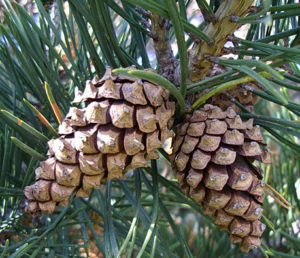 Female cones are produced in the axils of the scale leaves. The production of female cones is initiated in the winter. These become ready for pollination during the following spring. Each young female cone has a central axis. It bears spirally arranged scales. The scales are of two types. Some are thin membranous and are directly attached to the central axis. They are called bract scales. Woody ovuliferous scales are present on the ventral surface of each bract scale. The broader end of the ovuliferous scale has projection called the umbo. Each ovuliferous scale bears two ovules. They are situated side by side on upper side. Each ovule (megasporangium) has a mass of nucellar tissue. They are surrounded by a single integument. The micropylar end of the ovule is directed towards the central axis. A single megaspore mother cell is differentiated in the nucellus near the micropylar end. This megaspore mother cell undergoes meiosis to form four megaspores. Only the lower most megaspore remains functional. The others disintegrate. Functional megaspore (embryo sac) increases in size. It occupies the major part of the nucellus. Pollination takes place at this stage. 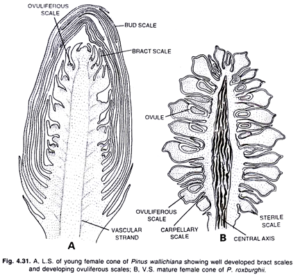 The megaspore divides many times to form female prothallus. Megaspore wall encloses the female prothallus. Three archegonia are produced towards the micropylar end.
Each archegonium develops from a single prothalial cell.
Archegonia consist of a large venter and a short neck.
The oosphere or egg is very large. It is bounded by the prothalial cells.
There is a small ventral canal cell below the neck.
The neck is without any neck canal cells.
The prothalial tissue enlarges very much in size. It crushes all nucellar tissue except a small amount near the micropylar end.

Each ovule secretes a mucilaginous drop at the micropylar end. A gap is produced between the ends of the ovuliferous scales. It forms a passage for the entry of pollen grains. Wind carried pollen grains. The mucilage drop entangles the pollen grain. Pollen grain is carried through the micropyle to the surface of the nucellus. 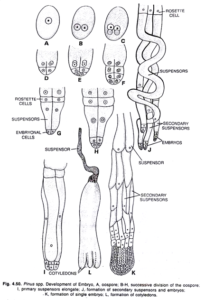 Formation of Embryo and Seed

A fully developed embryo is in the form a short straight axis. Its radicle is present towards the micropylar end. Plumule is present towards the inner side. Plumule is surrounded by ten cotyledons. The unutilized prothalial tissue forms the endosperm. The persistant nucellus tissues near the micropylar end form the perisperm. The integument becomes hard testa. Some part of the ovuliferous scale fuses with the developing seed. It makes a large wing for dispersal of seed. The axis of the female cone rapidly increases. It produces gaps in ovuliferous scales. The cone becomes woody for the dispersal of seeds.

The radicle grows out. It splits the testa at the micropylar end. This radicle grows down into the soil and forms the primary root. The hypocotyl elongates to form a loop. Then it becomes straight. It carries with it the plumule and the cotyledons. The testa is also carried up with the cotyledons. 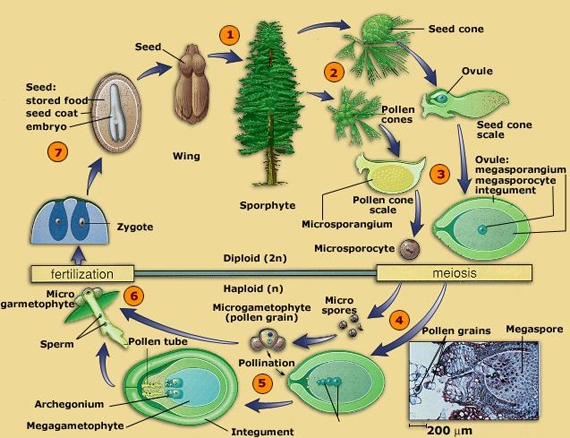