Polypodium is a perennial herb. It is found mostly in temperate regions. It has worldwide distribution. Mostly is attached to some rocks. But some forms are epiphytic. 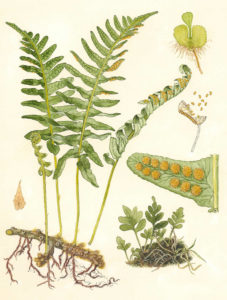 1.  Rhizome:
It forms the main stem of the plant. Rhizome is rounded, underground. But its apex is erect. It has very few blanches. It is covered with persistant leaf bases and hairs.

2.  Leaf:
The leaves are pinnately compound or simple. In compound leaf, the leaf has leaflets or pinnae. Leaves are lobed frond like. They have long stalked petiole. The leaves are arranged spirally. The form simple reticulate or dichotomous venation. The young leaves show circinate vernation.

3. Roots:
They have adventitious roots. These roots arise from the lower surface of rhizome.

In cross section rhizome is composed of epidermis, cortex and stele. Epidermis is outer most covering. It is without stomata. Cortex is wide and it is composed of parenchymatous tissues. Canal are absent in it. Stele is present in the inner side. It is covered by endodermis and pericycle. Polypodium has polystelic protostele. Each protostele has concentric vascular bundles. The xylem are exarch (protoxylem lies on the periphery of metaxylem).

Root has simple internal structure. It has outer epidermis, cortex and stele. Stele is protostcle and diarch. 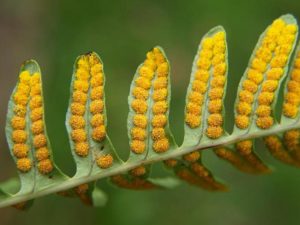 Fig: Sori on underside of leaf

Some leaves bear sporangia. They are called sporophylls. Sporophylls are foliage leaves. Sporangia are present in groups called sori. Sori are borne on the undersurface of vein of the leaves.. Sori are oval in shape. Each sorus is naked (without indusium).
Each sorus has a group of stalk sporangia. A capsule is present on the stalk. The capsule is lenticular or biconvex. The jacket wall of capsule is single layered. This wall is differentiated into thick wall cutinized annulus and thin wall stomium. A large number of spores are present inside the capsule. Tapetum is two layered present inside the wall.
Polypodium is a homosporous. Number of spores per sporangium are 64. Spores are small, dark brown and oval. The wall of spore is composed of intine and exine. The wall ruptures at stomium during dehiscence of capsule. 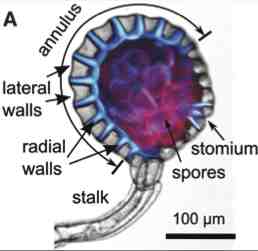 Development of the Sporangium

I. Each sporangium develops from a single superficial cell. This cell enlarges to form an outgrowth. This cell cuts off a small cell at the base. It itself becomes the sporangial initial.

3.  The stalk cell divides to form two celled thick stalk. The sporangial cell divides to cut off three cells at the periphery. It itself becomes tetrahedral central cell.

4.  This central cell cuts off another peripheral cell at the tip. The four peripheral cells thus produced. They become jacket initials. These cells divide to produce a single layered wall. The central tetrahedral cell is the archesporial initial.

The spore germinates to produce monoecious gametophyte. Gametophyte is surface living. It is differentiated dorsoventrally. It has an apical notch. It is green and heart shaped. The ventral surface of prothellus has many rhizoids. Many antheridia are present among the rhizoids toward the ventral side of mature prothellus Many archegonia are present near the apical notch.

The antheridia are slightly projected on the surface. They are spherical or oval in shape. Each antheridium has a layer of jacket cells. Antherozoid mother cells are present within the jacket. Sperm mother cells are changed in spirally twisted multiflagellate sperm or antherozoids.

The archegonia are also very numerous. Their neck is sunken in the prothellus. Each archegonium is flask shaped. It consists of curved neck and a venter. Neck is made up of several neck cells and one neck canal cells. Venter has single venter canal cell and oosphere. Development of the Archegonium

1.  Each archegonium develops from a single superficial cell near the growing apex. This cell enlarges to form a small basal cell and large upper cell.

At the time of fertilization, the ventral canal cell and the neck canal cell disintegrate and form mucilaginous mass. This mass oozes out of the neck of archegonium. The antherozoid is attracted to the mucilage. A large number of antherozoids reach the base of the archegonium. But only one of them fuses with the oosphere to form oospore.

Development of the Embryo

3.  The primary root grows for sometime under the prothallus. It then enters the soil and absorbs nutrients. Cotyledonary leaves are simple. The stem apex produce more leaves. Te stem apex grows horizontally in the soil forming the rhizome. Prothallus ultimately disappears.

Polypodium shows a regular alternation of sporophytic and gametophytic generations. Both generations are independent. Sporophyte produces the haploid spores by meiosis. The spores germinate to form haploid prothallus or gametophyte. Prothellus is monoecious. It produces antheridia and archegonia. The union of antherozoid and oosphere produces diploid oospore. Oospore germinates to form diploid sporophyte. 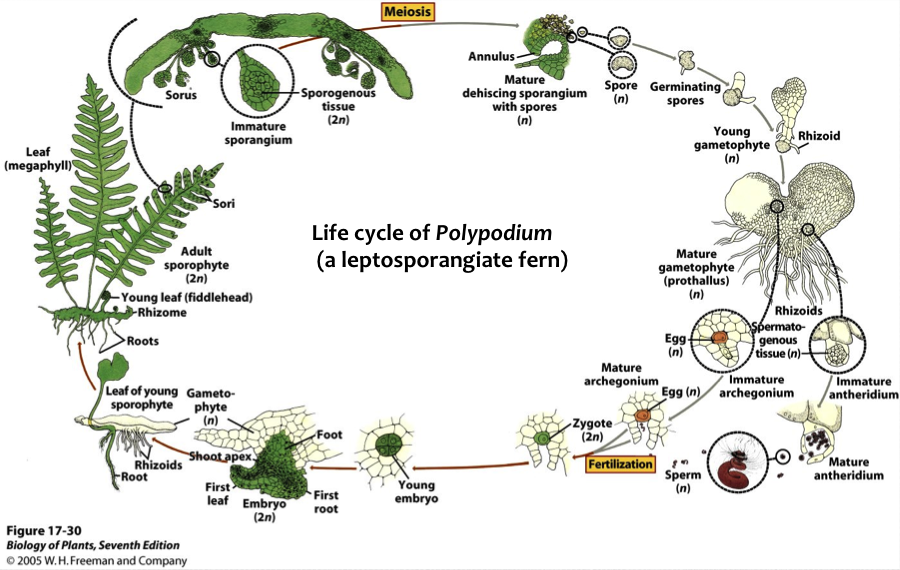