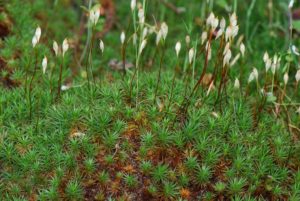 Polytrichum have worldwide distribution. They are very common in cool temperature and tropical regions. Plants live in cool and shady places. They may be found growing on open soil or tree trunks as epiphytes. 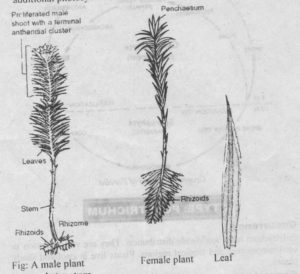 1.  Rhizome: It is horizontal portion and grows underground. It bears three rows of small brown or colourless leaves. It also bears rhizoids. The cells are rich in protoplasm and oil globules.

3.  Leaves: Leaves have broad bases. Leaves in the upper portion are green. But the lower ones are brown. Each leaf has a broad, colourless sheathing leaf base and narrow distal limb. The mid-rib forms the major part of the leaf. These leaves possess extra photosynthetic tissue in the form of closely set vertical plates of green cells. These are known as lamellae. Green lamellae act as additional photosynthetic tissue.

The mid-rib region is thick. But the margins are only one cell thick.
The lower surface is bounded by epidermis.
One or two layers of sclerenchymatous tissues are present above the epidermis.
The central tissue of leaf is composed of thin-walled parenchymatous tissues.
Above this are again sclerenchymatous cells.
The upper surface is formed of a layer of large cells from which arise numerous lamellae. This upper portion is the main photosynthetic region of the leaf.

Stem:
The rhizome is triangular.

Cortex:
The cortex is divided into three radial strands. The cortex consists of three to four layers of cells off which the outer layer is strongly suberized.
The innermost layer consists of very large cells with thin walls the endodermis.

Pericycle:
Two to three layered pericycle is present beneath the endodermis. It does not make continuous band. It surrounds the central cylinder.

i) Sterome
The major part of central cylinder is made up of elongated cells which form the sterome.
ii) Hydroids
among the sterome there are scattered groups of empty, elongated cells the hydroids.
iii) Leptiods
The three radial strands start from groups of thick walled cortical cells, while there inward ends remain embedded in the central cylinder, consists of thin walled leptoids.
iv) Amylome
The inner group of leptoids is separated from tissue of the central cylinder by a single layer of small cells containing starch, the amylome.

The T.S. of stem shows three regions: medulla, cortex and  epidermis.
The medulla is again differentiated into two zones: central zone and peripheral zone. The cortex consists of thick-walled cells.
The innermost layer of cortex around the conducting strands is known as a mantle. Its cells contain starch grain, also called as Amylom layer. 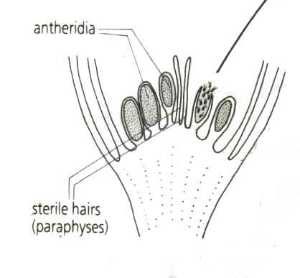 Mature antheridium is club-shaped. It is composed of a short stalk and a club-shaped body. Jacket is present around the capsule. Inside the jacket are present androcyte mother cells. They give rise to biflagellate sperms. 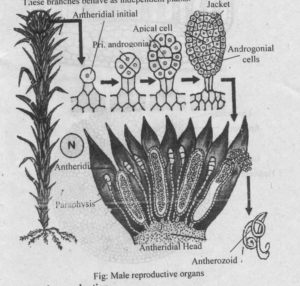 1.  The antheridia arise from the embryonic cells at the tip of male
shoot. The embryonic superficial cell forming antheridium is called antheridial initial. It increases in size. It undergoes transverse division to form lower primary stalk cell and the upper antheridial mother cell.

6.  The antheridia always dehiscence in the presence of water.  The operculum cell is thrown out and pore is formed at the apex. Sperm mass contained in mucilage comes out.

The flask-shaped archegonia are borne at the apices of leafy stems. Archegonitim is surrounded by perichaetial leaves. These leaves overlap to form a closed bud-like structure. The archegonia occur in cluster of 3 to 6.

The sex organs dehiscence in the presence of water.
The venter canal cell and the neck canal cells dissolve to form mucilage.
This mucilage exerts pressure and the neck opens out. The mucilage comes out of the neck.
The sperms reached the archegonial heads by rain water. They are attracted towards the archegonia.
One of the sperm swims down the open neck and reaches the base.
It fuses with the egg to form oospore. Oospore is the first stage of sporophytic generation. 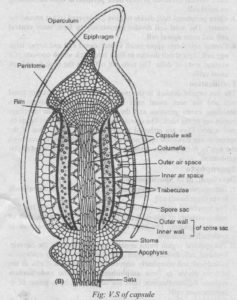 2.  The hypobasal region forms foot and lower part of seta. The foot region consists of thin-walled cells. It is embedded in the stalk of the archegonium. The cells of the seta are larger and poor in cytoplasmic contents.

5.  The amphithecium divides to form seven rings of cells. These cells give rise to spongy tissues and epidermis of apophvsis. They also form outer wall of theca.

The mature sporogonium is differentiated into foot, seta and capsule.
Foot.: The foot is buried deep in the tissue of gametophyte. It is absorptive in function. It consists of thin-walled narrow cells containing dense cytoplasm.

Seta: The seta is several inches long. It carries the capsule high into the air. It also conducts water and food. It consists of epidermis, cortex and central conducting strands.

Capsule: The upper part is capsule. It is differentiated into three regions: apophysis, theca and operculum.

1.  Apophysis: It is the lower part of capsule. It is continuous with the seta. It is in the form of a swollen ring-like protuberance. Its cells are thin-walled, green and loosely arranged. The apophysis is the main photosynthetic region of the capsule.

2.  Theca: It is the middle part of the capsule. It is four-lobed. Its wall is several layered. The outermost layer is epidermis. Trabecular air spaces are present inside the wall layers. These spaces have filaments of thin-walled elongated cells containing chloroplasts. Outer spore sac wall is present internal to outer trabecular spaces. This is followed by spore-sac proper. Then 2-layered inner spore-sac wall is present. Then inner trabecular air space is present. The centre is occupied by solid columella. All the sporogenous cells are fertile and form spores after reduction division.

3.  Operculum: This is the uppermost part of the capsule. It is conical. The operculum is covered by calyptra. The calyptra forms a hairy structure. So Polytrichum is also known as hair moss. A constriction is present between operculum and theta. A rim or diaphragm is present at the base of this constriction. The celumella of the theca is continuous into the operculum. It expands into a fan-shaped epiphragm.Peristome is present in the form of a thick rim. It bears a number of rigid teeth. The epiphragm fills the space inside the ring of peristome teeth and is attached to their tips. Peristome teeth arise from the rim or diaphragm.

Cells of the epiphragm dry up during dry conditions. It separates the operculum. The calyptra f
alls. Epiphragm also dries up between the peristome pores. The central tissue of theca region except the spores degenerates. Thus the spores lie free in the centre of the capsule at maturity. Spores come out through pores. They are dispersed by wind.

Structure and germination of spores

The spores are yellow. Each spore is uninucleate and has two wall layers.
The outer layer is exosporium(exine). The inner layer is endosporium. The spore germinates under favourable conditions. 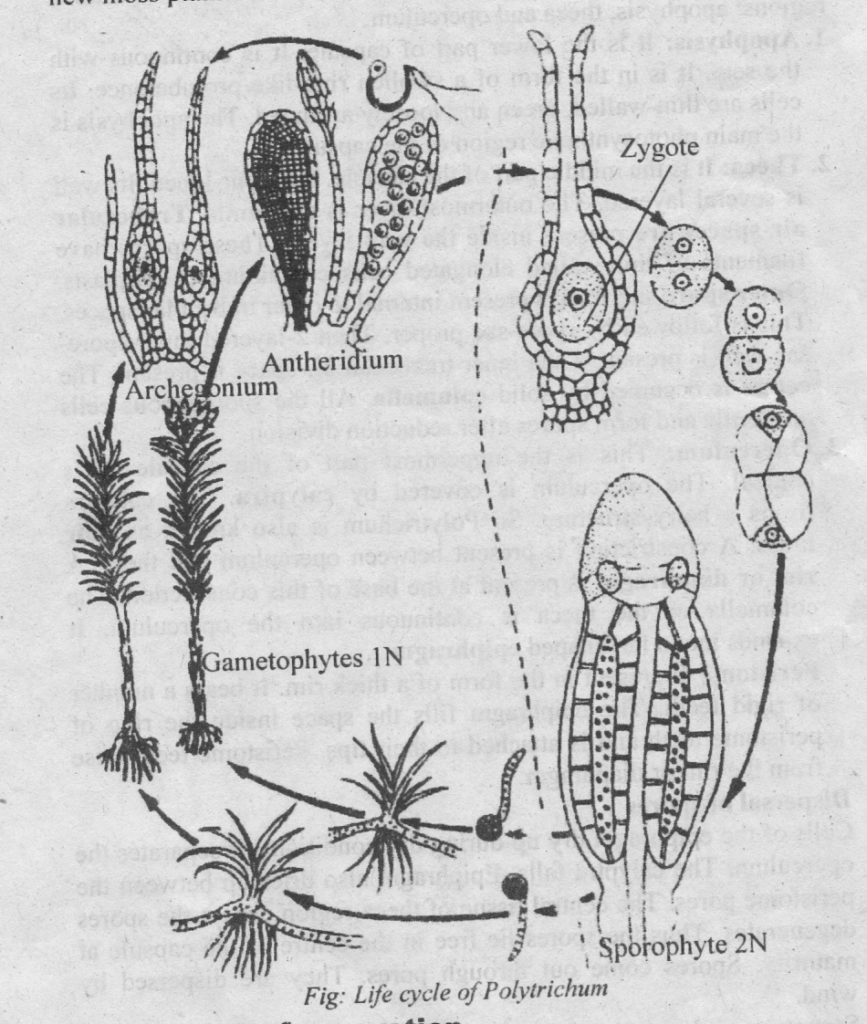