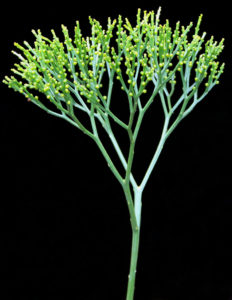 Psilotum is distributed in tropical and subtropical regions. It may grow as an epiphyte on the bark of trees. It also grows on soil where humus is abundantly available. 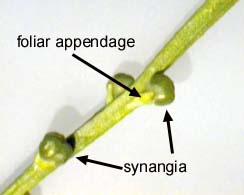 1.  Rhizome:
Rhizome is underground part of stem. Leaves and roots are absent on rhizome. Rhizome develops rhizoids for absorption of water.

3.  Sporangia:
The sporangia are borne in triads. They have very short stalks. They are borne in the axils of small bifid leaves on the aerial branches. This triad of sporangia is called a synangium. The two lobes of the leaf are closely united with the synangium. 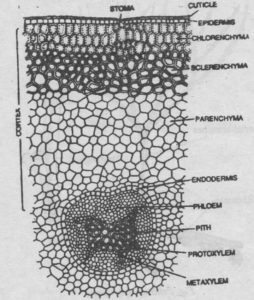 2. Stele:
There is a well developed endodermis between the stele and the cortex. The xylem is actinostelic. It has six rays. A core of thick walled sclerenchymatous fibers (pith) is present in the centre of the xylem. Phloem is present between the endodermis and xylem. 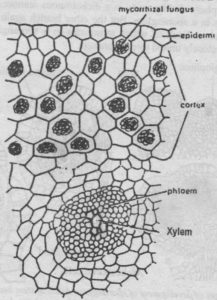 Rhizome:
The structure of the rhizome is similar to that of aerial branches. But pith or sclerenchymatous tissues are not present in the centre of the xylem core. The phloem is poorly developed. The cortex is composed of thin walled parenchyma. A mycorrhizal fungus lives in it. The cells of lower epidermis contain rhizoids.

Leaves:
The leaves have simple structure. The epidermis is formed of cutinized cells and is without any stomata. The internal tissue is formed of photosynthetic tissue. The leaves are without a vein.

Vegetative reproduction takes place by the death of the older parts of the rhizome. The younger parts of rhizome separate from the dead rhizome. They grow as long as independent plants. Sometimes, the upper cell of the rhizoids divides and produces a small gemma. The gemma develops into a new rhizome after detachment.

Psilotum is homosporous. Sporangia form groups of three on short stalks. This stalk is present in the axils of small bifid leaf. The group of three fused sporangia is called a synangium. It is believed that synangium is sporangiophore. It has bifid bract at its base. The sporangia develop independently from each other. The sporangiophore divides early in a dichotomous manner. One branch terminates in a sporangium. But the other branch again divides into two branches. Each of which terminates in a sporangium. Thus it produces closely united three sporangia.

1. Each sporangium develops from a superficial cell of the sporangiophore. This cell divides transversely into an outer jacket initial and an inner archesporial initial.

3. In the mature sporangium some of the archesporial cells become elongated. They are filled with dense cytoplasmic contents. These cells act as spore mother cells. Each spore mother cell undergoes meiosis and produces four spores. The rest of the archesporial cells disintegrate to form protoplasmic mass or tapetal fluid. It nourishes the developing spores.

The epidermal cells of the sporangial wall become thick walled. But a single vertical line from the base of the sporangium to the apex remains thin walled. The mature sporangium dehisces along this line and the spores are liberated.

Each spore germinates to produces a small thallose gametophyte or prothallus. The gametophyte is colourless and subterranean (underground). It has one two or more short dichotomous branches. Gametophyte is infested with mycorrhizal fungi. There are no vascular strands in the gametophyte. It bears numerous unicellular rhizoids. The gametophyte does not have much internal differentiation of tissues. It is monoecious. The sex organs are produced near the growing apex.

Antheridia are produced earlier than archegonia. The mature antheridium is globular structures. It project out on the surface of the gametophyte.

Each antheridium develops from a single  superficial cell. It divides into an outer jacket initial and an inner primary androgonial cell. The jacket initial divides to produce a single layered wall. The primary androgonial cell divides to produces a mass of androcytes or antherozoid mother cells. Each androcyte gives rise to a single, coiled and multiflagellate antherozoid. The antheridial wall ruptures to release the antherozoid.

The mature archegonium consists of a neck and basal part. The neck contains one or two neck canal cells. The basal part is embedded in the gametophytic tissue. It is without any well defined venter. It contains a single large oosphere. 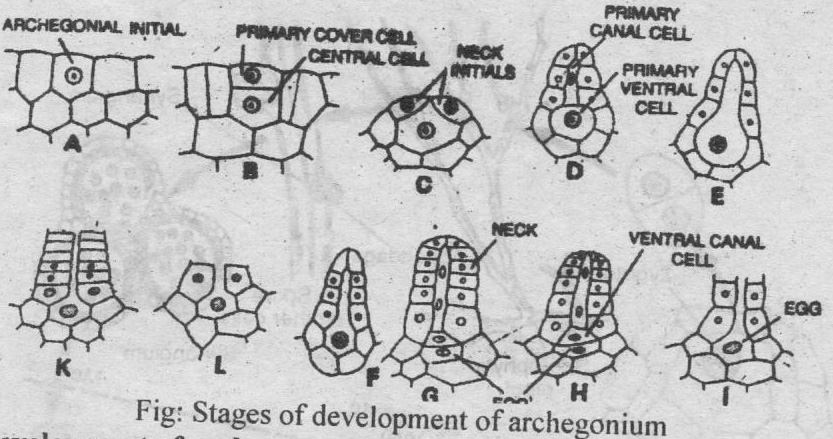 I. The oospore divides transversely into an upper and a lower cell.

2.  The lower cell by further divisions produces a foot. Foot buried into the tissue of the prothallus. It absorbs nourishment for the developing embryo.

3.  The upper cell divides to produce a mass of cells. Its one or two peripheral cells act as apical cells. The apical cell divides and increases the size of embryo. The gametophytic tissue completely surrounds the young embryo like calyptra in early stages. But later, it comes out of the calyptra. Some of its surface cells produce rhizoids. Other cells are infested with the mycorrhizal fungi and the embryo becomes independent. The embryo by further growth becomes the rhizome. Rhizome develops aerial dichotomous branches. 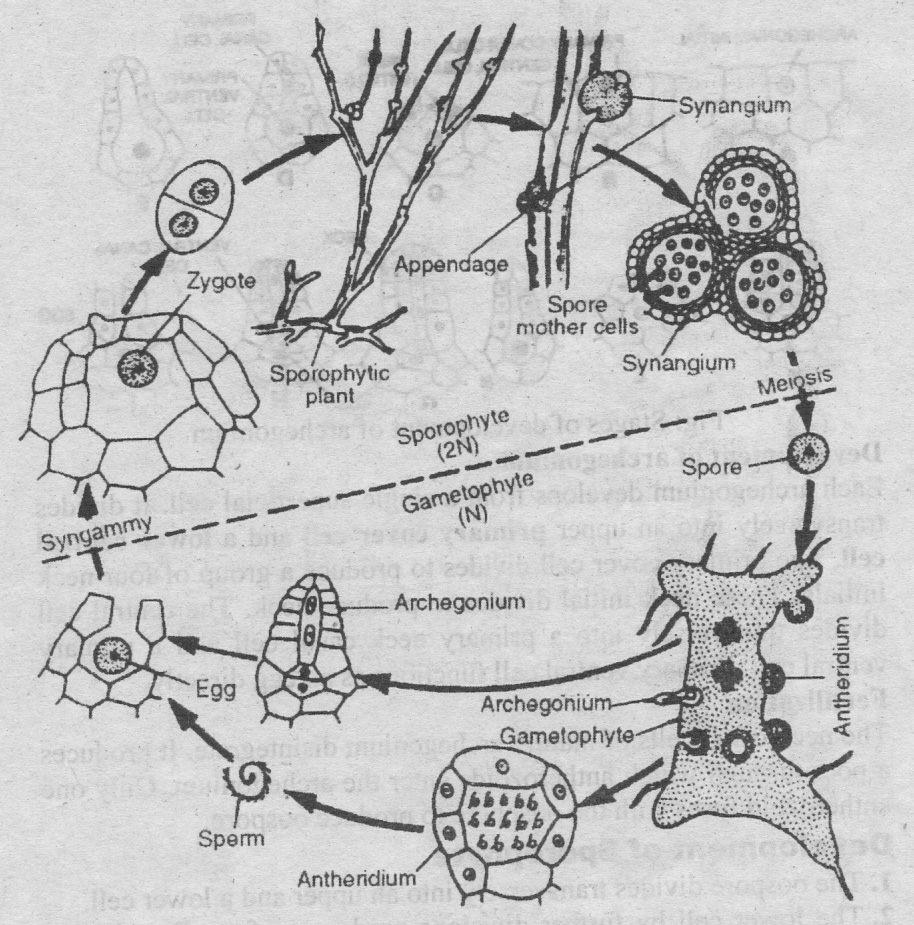