Species of Pythium grow in water and soil as saprotrophs, but under suitable conditions, e.g. where seedlings are grown crowded together in poorly drained soil, they can become parasitic, causing diseases such as pre-emergence killing, damping off and foot rot. Damping off of cress (Lepidium sativum) can be demonstrated by sowing seeds densely on heavy garden soil or garden compost which is kept liberally watered.

The host cells separate from each other easily due to the breakdown of the middle lamella, probably brought about by pectic and possibly cellulolytic enzymes secreted by the fungus. The enzymes diffuse from their points of secretion at the hyphal tips, so that softening of the host tissue actually occurs ahead of the growing mycelium.

Within the host the mycelium is coarse and coenocytic, with typically granular cytoplasmic contents. At first there are no septa, but later cross walls may cut off empty portions of hyphae.

Thick-walled chlamydospores may also be formed. There are no haustoria.

Several species are known to cause damping off, e.g. P. debaryanum and, perhaps more frequently, P. ultimum. Pythium aphanidermatum is associated with stem rot and damping off of cucumber.

The mycelium within the host tissue or in culture usually produces sporangia, but their form varies. The sporangia are filamentous and are scarcely distinguishable from vegetative hyphae. In many species, however, e.g. P. debaryanum, the sporangia are globose.

A terminal or intercalary portion of a hypha enlarges and assumes a spherical shape, then becomes cut off from the mycelium by a cross wall. The sporangia contain numerous nuclei. Cleavage of the cytoplasm to form zoospores begins in the sporangium, but is completed within a thinwalled vesicle which is extruded from the sporangium. This is a homohylic vesicle because its glucan wall is continuous with one layer of the sporangial wall.

Within the sporangium, cleavage vesicles begin to coalesce to separate the cytoplasm into uninucleate portions. The fascinating process of differentiation from amorphous cytoplasm to motile zoospores takes about 30-45 min.

Discharge of the sporangium occurs by the formation of a thin-walled vesicle at the tip of the papilla from the fibrillar material of the apical cap, and the partially differentiated zoospore mass is extruded into it. The movement of the cytoplasm from the sporangium into the vesicle is probably the result of several forces including the elastic contraction of the sporangium wall and possibly surface energy.

The contents of sporangium may transform into Zoospores. In some forms, e.g. P. ultimum var. ultimum, sporangia do not release zoospores but germinate directly by producing a germ tube

Most species of Pythium are homothallic, i.e. oogonia and antheridia are readily formed in cultures derived from single zoospores. However, some heterothallic species are known, e.g. P. sylvaticum, P. heterothallicum.

arise as terminal or intercalary spherical swellings which become cut off from the adjacent mycelium by cross-wall formation. The young oogonium is multinucleate and the cytoplasm within it differentiates into a multinucleate central mass, the ooplasm from which the oosphere develops, and a peripheral mass, the periplasm, also containing several nuclei. The periplasm does not contribute to the formation of the oosphere.

As soon as the gametangia have become delimited by the basal septum, mitotic divisions cease. Nuclei may be aborted at this stage, and in oogonia

arise as club-shaped swollen hyphal tips, often as branches of the oogonial stalk (monoclinous) or sometimes from separate hyphae (diclinous).

In the antheridium of P. debaryanum and P. ultimum, all nuclei but one degenerate prior to meiosis, so that four haploid nuclei are present in each antheridium just prior to plasmogamy The antheridium then attaches itself to the oogonial wall and penetrates it by means of a fertilization tube. Following penetration, only three nuclei were counted in the antheridium, suggesting that one had entered the oogonium.

Fusion between a single antheridial and oosphere nucleus has been described. The fertilized oosphere secretes a double wall, and the ooplast appears in the protoplasm.

Material derived from the periplasm may also be deposited on the outside of the developing oospore. Such oospores may need a period of rest (after ripening) of several weeks before they are capable of germinating. Germination may be by means of a germ tube, or by the formation of a vesicle in which zoospores are differentiated, or in some forms the germinating oospore produces a short germ tube terminating in a sporangium. 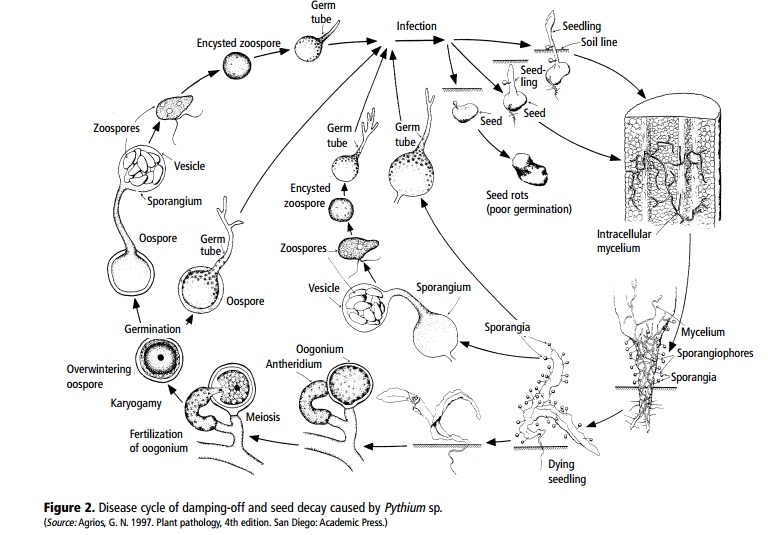