Ultraviolet light absorption is a general method for detecting DNA, but does not distinguish between different DNA molecules. DNA can also be detected with radioactive isotopes 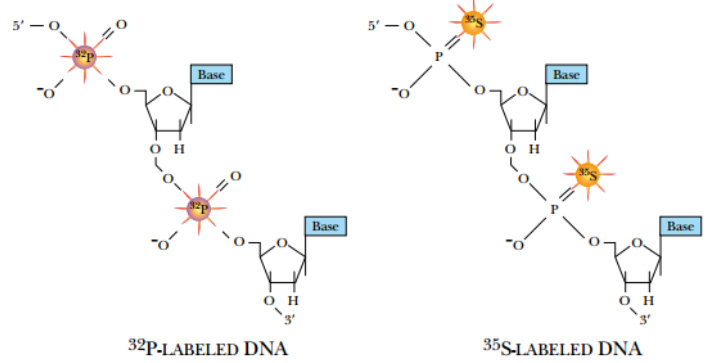 Fig: Radioactively Labeled DNA
DNA can be synthesized with radioactive precursor nucleotides. These nucleotides have 32 P (rather than
nonradioactive 31 P phosphorus) or 35 S (replacing oxygen) in the phosphate backbone.

The radioactive nucleotide precursors can be supplied to rapidly growing bacterial cultures. During replication, the radioactive precursor is incorporated into new DNA. The DNA is isolated from the bacteria and run on a gel. Autoradiography identifies the location of radioactively labeled DNA in the gel.

Fig: Autoradiography
A gel containing radioactive DNA (or RNA) is dried and a piece of photographic film is laid over the top. The two are loaded into a cassette case that prevents light from entering. After some time (hours to days), the film is developed and dark lines appear where the radioactive DNA was present

If the gel is thin, like most polyacrylamide gels, it is dried with heat and vacuum. If the gel is thick, like agarose gels, the DNA is transferred to a nylon membrane using capillary action.

The dried gel or nylon membrane is placed next to photographic film. As the radioactive phosphate decays, the radiation turns the photographic film black. Only the areas next to radioactive DNA will have black spots or bands. The use of film detects where the hot DNA is on a gel, and the use of ethidium bromide shows where all of the DNA, hot or cold, is. These two methods allow distinguishing one DNA fragment from another.

Autoradiography has its merits, but working with and disposing of radioactive waste is costly, both monetarily and environmentally. Using fluorescently tagged nucleotides was developed as a better method of DNA detection. Fluorescent tags absorb light of one wavelength, which excites the atoms, increasing the energy state of the tag. This excited state releases a photon of light at a different (longer) wavelength and returns to the ground state. The emitted photon is detected with a photodetector . There are many different fluorescent tags, and each emits a different wavelength of light. Some photodetector systems are sensitive enough to distinguish between these different tags; therefore, if different bases have different fluorescent labels, the photodetector can determine which base is present. This is the basis for most modern DNA sequencing machines.

Chemical Tagging with Biotin or Digoxigenin

Biotin is a vitamin and digoxigenin is a steroid from the foxglove plant. Using these two chemicals allows scientists to label DNA without radioactivity or costly photodetectors. Biotin or digoxigenin are chemically linked to uracil; therefore, DNA must be synthesized with the labeled uracil replacing thymine. The DNA is synthesized in vitro as described in. A single-stranded DNA template, DNA polymerase, a short DNA primer, and a mixture of dATP, dGTP, dCTP, plus dUTP linked to either biotin or digoxigenin are combined. DNA polymerase synthesizes the complementary strand to the template, incorporating biotin- or digoxigenin-linked uracil opposite all the adenines. The labeled DNA is visualized in a two-step process. First, for biotin, a molecule of avidin binds to the tag. For digoxigenin, a specific antibody binds to the tag. Both avidin and the digoxigenin antibody are conjugated to alkaline phosphatase , an enzyme that removes phosphates from a variety of substrates.