Red rot, caused by Colletotrichum falcatum, is one of the major diseases of sugarcane in the world.

Red rot attacks the stalks, stubble rhizomes, and leaf midribs of the 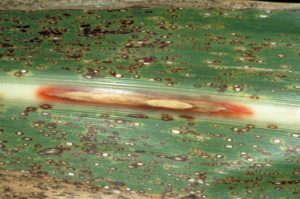 sugarcane plant. It may invade leaf-blade and leaf-sheath tissues
and is capable of infecting sugarcane roots but it is not
important as a disease of these organs.

Red rot is frequently not discernible from external examination of
the sugarcane stalk unless it has so completely rotted the interior as to
cause the rind to lose its natural bright color and become dull in
appearance. Plants so affected may be detected by the yellowing, shriveling, and dying of the upper leaves. The disease is
recognized by the longitudinal reddening of the normally white or
yellowish-white internal tissues 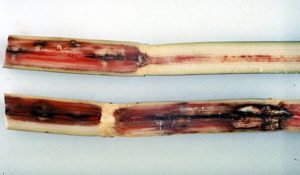 of the internode, especially when this red color is interrupted by occasional white patches extending crosswise of the stalk.

Manifestation of red rot varies depending on the nature of infection, time of the season and the prevailing environment. If sufficient inoculum is present in/on the set in active form and if adequate moisture is available, it causes both pre and post-emergence mortality of the sprouts during April-May in the subtropical region. With the advent of pre-monsoon showers, symptoms of the disease start appearing, and with the onset of the monsoon when the weather is most suitable, full manifestation of the disease takes place. Later on, infected plants turn yellow and finally dry up. At the grand growth phase, when sufficient stalk and sugar have formed, typical stalk rot phase (red rot phase) appears. Red rot is not easily identified from the external appearance of the cane unless it has caused irreparable damage by rotting the internal tissues. In such cases, the rind loses its natural bright colour, turns violet or displays dark reddish tinge, and becomes dull in appearance. The affected plants appear sick; usually yellowing of the 3rd or 4th leaf, these being the prominent leaves of the crown, draw the attention of the observer from a distance (The yellowing may start from any leaf of the crown there is no hard and fast rule). Yellowing of leaf starts from the tip and proceeds down along the leaf margin. C. falcatum proliferates within the cane stalk happily, and usually comes out through the root primordia for secondary spread when sufficient rotting of the internal tissues has taken place. The fungus totally transforms the root primordia into black acervuli bearing abundant conidia (the black colour is due to the dark setae). At this stage, if the cane is split open longitudinally, typical symptoms of red rot, viz., reddening of the internal tissues with interrupted red and white patches (white spots) in the affected internodes, rotten or damaged node, and the presence of typical sourly alcoholic smell may.

Follow the long furrow method or pair row method of layout for planting and irrigation.

Planting material should be collected from the seed nursery

To control the secondary spread of the disease, follow the following practices

Rogue out the affected clumps & destroy it by burning. Stools should not buried in the soil or should not be kept or thrown on bunds

After roguing, drench the spot with the 0.1% carbendazim containing fungicide

After the harvest of the diseased crop, left over trash with stools should be burnt immediately

Crop rotation should be followed to break the rapid built up of the disease. In rotations, it is advisable to include green manure crop. Because this not only increases the population of the antagonistic mycoflora but also helps to break the life cycle of disease

Avoid ratooning of the diseased crop