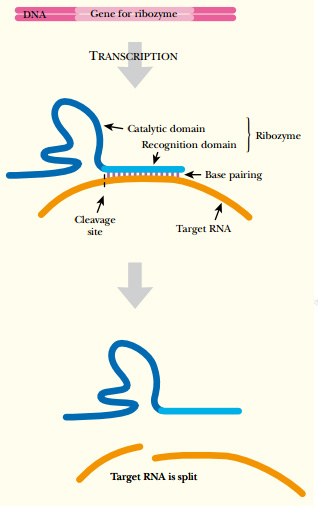 FIGURE: Targeted Ribozymes
Gene therapy can also be used to transfer a gene for
a ribozyme into a defective cell. The ribozyme has
two domains; the catalytic domain acts as an enzyme,
and the recognition domain binds to a specific target
RNA. Once bound, the enzyme domain cleaves the target RNA.

Thus ribozymes may be engineered to recognize and destroy any target messenger RNA molecule. So far this use of ribozymes is still in the experimental phase. In practice, a vector carrying a gene encoding the ribozyme would presumably be used for delivery to the target cell.

Transcription of this gene would result in production of the ribozyme RNA. The ribozyme would then bind and cleave the target mRNA. All naturally occurring nucleic acid enzymes are made of RNA. However, there is no chemical reason why DNA cannot act catalytically.

Indeed, deoxyribozymes may be synthesized artificially, using sequences equivalent to those of RNA ribozymes. The DNAzymes are less easily degraded and may be manufactured in multiple copies by a PCR-based technique. Most DNAzymes presently under investigation are targeted at cancer cells or infectious microorganisms.

Antibiotic resistance among bacteria is becoming a major problem. One interesting possibility is to use DNAzymes to cleave the mRNA for enzymes that make bacteria resistant to antibiotics. The bacteria could then be killed with the antibiotics despite carrying a resistance gene.