About 10-16 species of Saccharomyces are currently recognized.  We will focus on S. cerevisiae, which in many ways is the most important fungus yet discovered. About 25 strains of S. cerevisiae exist, and these have different physiological properties which are relevant to their biotechnological applications. Many were formerly regarded as different species. Saccharomyces cerevisiae is the brewer’s and baker’s yeast (see below), although some of the best brewing yeasts in current use belong to S. pastoria 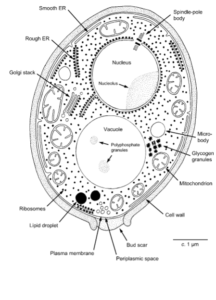 nus (S. carlsbergensis). In nature, S. cerevisiae is found on ripe fruits, like many other yeasts. Grape and fruit wines are still often made by relying on spontaneous fermentations by yeasts which happen to be growing on the skin of the fruits used.

A vegetative yeast cell is densely packed with organelles, including one nucleus, a large central vacuole, and mitochondria. Mitochondria are very dynamic in shape, showing a pronounced tendency to fuse into one or a few large reticulate organelles when the energy demand is high, or to fragment into numerous small promitochondria during anaerobic fermentation or metabolic inactivity. An immense amount of literature exists on S. cerevisiae, covering aspects of genetics and molecular biology, physiology, cytology and biotechnology.

The life cycle of S.cerevisiae Vegetative cells of S. cerevisiae are generally diploid in nature, although tetraploid or aneuploid strains also occur. Strains may be homoor heterothallic.

The haploid ascospores often fuse within the ascus where they were formed, or shortly after release. However, if individual ascospores become isolated, they can germinate and reproduce as haploid cells by budding.

Where two haploid cells of opposite mating type are in close contact, they secrete peptide hormones and produce plasma membrane-bound receptors which recognize the hormone of opposite mating type. The binding of a hormone molecule to the matching receptor sets a signalling chain in motion which arrests the mitotic cell cycle at G1, stimulates transcription of mating-specific genes and causes polarized growth of the two cells towards each other. Mating initially involves an increased ability of the surfaces of two cells to adhere to each other.

This so-called sexual agglutination is mediated by glycoproteins. It seems that these are components of fimbriae, i.e. long filaments radiating outwards from the cell wall. Agglutination is followed by co-ordinated digestion of the walls separating the two cells. Plasmogamy and karyogamy follow swiftly. The resulting diploid cell can carry on reproducing asexually by budding.

Fig: The life cycle of S. cerevisiae. Both haploid and diploid cells can reproduce by budding.Open and closed circles represent haploid nuclei of opposite mating type; diploid nuclei are larger and half-filled. Key events in the life cycle are plasmogamy (P), karyogamy (K) and meiosis (M).

In contrast to Schizosaccharomyces pombe, there are therefore two mitotic cycles in the life cycle of S. cerevisiae. Under optimum conditions, the culture doubling time by mitosis is about 100 min. Diploid strains of S. cerevisiae can be induced to form ascospores by suitable treatment, and this yeast is therefore termed an ascosporogenous yeast, in contrast to asporogenous yeasts in which ascospores have not been observed. Meiosis can be induced by growing the yeast on a nutrient-rich presporulation medium containing an assimilable sugar, a suitable nitrogen source for good growth (nitrate is not utilized)