Spirogyra (Gr. Speira, a coil, Gr. Gyros, twisted) is a large genus. It is found throughout the world in fresh water. Its filaments look like a shining silky mass in running water. That is why it is also called “water-silk”, “pond scum” or “mermaid’s tresses”. 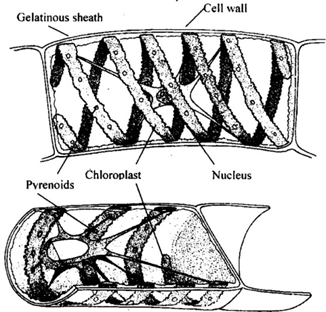 The plant body is filamentous, the filaments are green, simple, unbranched. A filament is a single row of cylindrical cells. The filaments are free floating. A few species remain attached to the substrata with the help of hapteron or holdfast.

The cells are generally more in length than in breath.

Reproduction in Spirogyra is vegetative and sexual. However, some species reproduce asexually through akinetes and aplanospore formation.

Fragmentation during favourable conditions, the filaments break into two or more fragments, each or which develop into a new filament.

Sexual reproduction is isogamous type and takes palace under unfavourable conditions. The conjugation may be of following types.

It takes place between the cells of two different filaments. The filaments lie side by side or parallel to one another, through their length.