E. coli is 900 genes per million base pairs,

that number drops to 110 genes per million base pairs for the fruit ﬂy Drosophila,

and it is only 9 genes per million base pairs for humans.

Eukaryotes deal with this situation in several ways.

5. RNA is synthesized in the nucleus where the DNA is located and must be modiﬁed in several ways before it can be exported out of the nucleus into the cytoplasm for translation.

These modiﬁcations are collectively referred to as RNA processing.

First,they have divided the job of transcription among three different polymerases.

a. RNA polymerase I:

transcribes all protein-coding genes,for which the ultimate transcript is mRNA, and transcribes some snRNAs.

transcribes the small functional RNA genes (such as the genes for tRNA,some snRNAs,and 5S rRNA).

The core of RNA polymerase II also cannot recognize promoter sequences on its own. However, unlike the case for bacteria, where sigma factor is an integral part of the polymerase holoenzyme, GTFs are required in eukaryotes to bind to regions in the promoter before the binding of the core enzyme.

The GTFs and the RNA polymerase II core constitute the preinitiation complex (PIC).

This complex is quite large: it contains six GTFs, each of which is a multiprotein complex, plus the RNA polymerase II core, which is made up a dozen or more protein subunits.

In an alignment of eukaryotic promoter regions, it can be seen that the sequence TATA is often located about 30 base pairs (-30 bp) from the transcription start site. This sequence, called the TATA box, is the site of the first event in transcription: the binding of the TATA binding protein (TBP).

When bound to the TATA box, TBP attracts other GTFs and the RNA polymerase II core to the promoter, thus forming the preinitiation complex.

After transcription has been initiated, RNA polymerase II dissociates from most of the GTFs to elongate the primary RNA transcript.

Some of the GTFs remain at the promoter to attract the next RNA polymerase core.

In this way, multiple RNA polymerase II enzymes can be synthesizing transcripts from a single gene at one time. 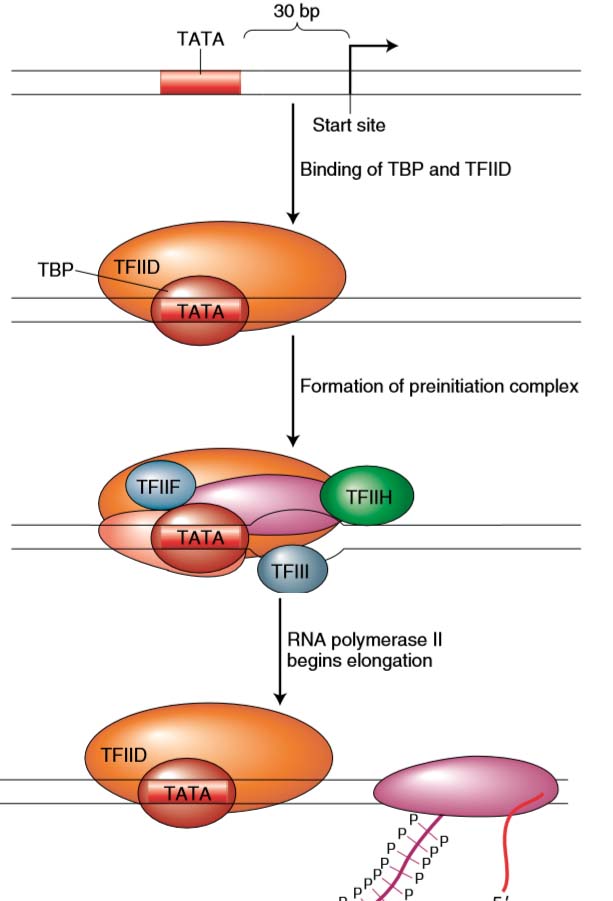 the processing of the 5′ end of the transcript of a proteincoding gene.

When the nascent RNA ﬁrst emerges from RNA polymerase II, a special structure, called a cap, is added to the 5. end by several proteins that interact with the CTD. The cap consists of a 7-methylguanosine residue linked to the transcript by three phosphate groups.

The cap has two functions.

First, it protects the RNA from degradation—an important step considering that a eukaryotic mRNA has a long journey before being translated.

Second, the cap is required for translation of the mRNA.

RNA elongation continues until the conserved sequence, AAUAAA or AUUAAA, near the 3′ end is recognized by an enzyme that cuts off the end of the RNA approximately 20 bases farther down. To this cut end, a stretch of 150 to 200 adenine nucleotides called a poly(A) tail is added.

Hence the AAUAAA sequence of protein-coding genes is called a polyadenylation signal.