The process of formation of RNA from DNA template.

The ﬁrst step of information transfer from gene to protein is to produce an RNA strand whose base sequence matches the base sequence of a DNA segment, sometimes followed by modiﬁcation of that RNA to prepare it for its speciﬁc cellular roles.

Hence RNA is produced by a process that copies the nucleotide sequence of DNA. Because this process is reminiscent of transcribing (copying) written words, the synthesis of RNA is called transcription.

The DNA is said to be transcribed into RNA,and the RNA is called a transcript.

First, the two strands of the DNA double helix separate locally, and one of the separated strands acts as a template for RNA synthesis. In the chromosome overall, both DNA strands are used as templates; but, in any one gene, only one strand is used, and, in that gene, it is always the same strand.

the non template strand is called as coding strand because the mRNA is just like it except T on DNA is replaced by U in mRNA.

It is a short sequence of nucleotides on DNA upstream from the gene.

The consensus region frequently occur 35 base pair (bp) and 10 (bp) upstream from the start of transcription. These two regions are called as -35 box and -10box (pribnow box).

In eukaryotes, a similar sequence called TATA box lies about 25 bp upstream from the start of transcription.

Figure2 Promoter sequence. (a) The promoter lies “upstream” (toward 5′ end) of the initiation point and coding sequences. (b) Promoters have regions of similar sequences,as indicated by the yellow shading in seven different promoter sequences in E. coli. Spaces (dots) are inserted in the sequences to optimize the alignment of the common sequences. Numbers refer to the number of bases before (-) or after (+) the RNA synthesis initiation point. The consensus sequence for all E. coli promoters is at the bottom.

In E.coli, single large RNA polymerase carry out the synthesis of mRNA, rRNA and tRNA with the subunit structure α2ββ’Ϭ.

This complete enzyme is termed as holoenzyme, which is needed to initiate transcription.

Core Enzyme: The Ϭ factor is essential for correct recognition of the promoter and it is removed after binding. The RNA polymerase without sigma subunit is called core enzyme.

Figure 3Transcription initiation in prokaryotes and the subunit composition of prokaryotic RNA polymerase. (a) Binding of the  subunit to the -10 and -35 regions positions the other subunits for correct initiation. (b) Shortly after RNA synthesis begins, the  subunit dissociates from the other subunits, which continue transcription.

The elongation phases of RNA synthesis, which begins after the formation of the first bond, is therefore carried by core enzyme.

Fig 4: Elongation: Synthesis of an RNA strand complementary to the single-strand region of the DNA template strand is in the 5-to-3 direction. DNA that is unwound ahead of RNA polymerase is rewound after it has been transcribed.

A portion of DNA double strand is unwound (12-17 bp) transcription takes place, after the transcription complex has passed, DNA rewinds. The transcription bubble moves along the DNA, leaving the growing strand protruding from the bubble. The RNA polymerase copies the DNA sequence accurately at the rate of 30 -40 nucleotides/second.

Transcription continues until a termination single is reached. The simplest termination

single is as GC-rich region that is a palindrome, followed by an AT-rich sequence .The RNA made from the DNA palindrome, is self- complementary and so base pairs internally to form a hairpin structure followed by a few U residues. However, not all termination sites have this hair pin structure. Those that lack such a structure require an additional protein, called rho (ρ), to allow recognition of the termination site and stop transcription.

Fig: 5 Termination: The intrinsic mechanism shown here is one of two ways used to end RNA synthesis and release the completed RNA transcript and RNA polymerase from the DNA. In this case, the formation of a hairpin loop sets off their release. For both the intrinsic and the rho-mediated mechanism, termination ﬁrst requires the synthesis of certain RNA sequences. 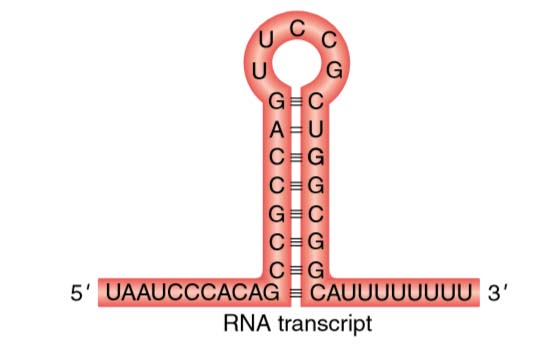 Figure 6 The structure of a termination site for RNA polymerase in bacteria. The hairpin structure forms by complementary base pairing within a GC-rich RNA strand. Most of the RNA base pairing is between G and C, but there is one single A–U pair.

ADDITION OF A CAP

ADDITION OF A TAIL