The process of protein synthesis.

The main task of initiation is to place the ﬁrst aminoacyl-tRNA in the P site of the ribosome and, in this way, establish the correct reading frame of the mRNA.

In most prokaryotes and all eukaryotes, the ﬁrst amino acid in any newly synthesized polypeptide is methionine, speciﬁed by the codon AUG.

It is inserted not by tRNAMet but by a special tRNA called an initiator, symbolized tRNAMeti.

How does the translation machinery know where to begin?

In prokaryotes, initiation codons are preceded by special sequences called Shine–Dalgarno sequences that pair with the 3′ end of an rRNA, called the 16S rRNA, in the 30S ribosomal subunit. This pairing correctly positions the initiator codon in the P site where the initiator tRNA will bind.

The mRNA can pair only with a 30S subunit that is dissociated from the rest of the ribosome. Note again that rRNA performs the key function in ensuring that the ribosome is at the right place to start translation. 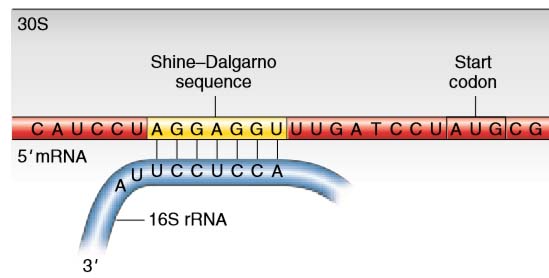 The first step in initiation involves binding of the mRNA to the 30 S subunit of ribosome. Initiation factor 3 (IF-3) controls this binding. The first codon AUG is exposed.

Figure 4 Termination of translation. Translation is terminated when release factors recognize stop codons in the A site of the ribosome