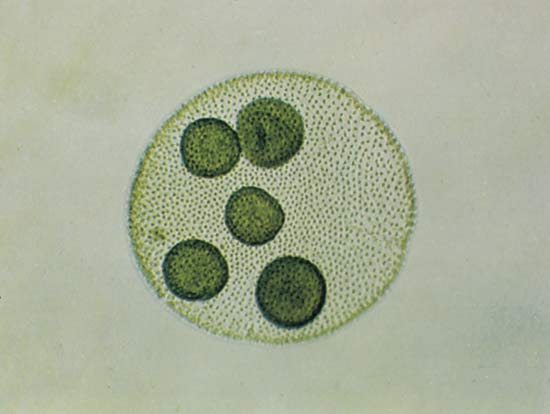 Volvox is freshwater algae. It makes water green. It appears in the spring.

All cells of a colony have similar shape and structure. The cells are closely packed. They are arranged to form polygonal shape in the colony. The wall of the mature cells is thick and mucilaginous.
Cell wall has thin middle lamella. Their cells are  pear shaped. These cells are embedded in the periphery of gelatinous colony. 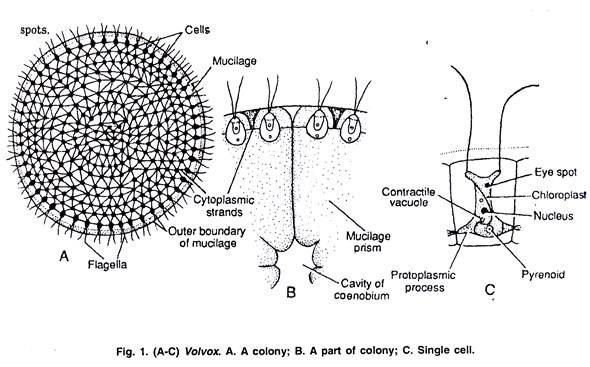 The structure of individual is similar to Chlaymydomonas. Each cell has two flagella. These flaglla are attached at the outer point end of cells.
Each cell has cup shaped chloroplast. It is present in the broader end of the cell.
One pyrenoid is present in the chloroplast.
Two or more contractile vacuoles are present near the point end.
Single nucleus is present in centre of the cell. It is connect to the flagella by neuromotor.
A single eye spot is present. Cells at the anterior surface of colony have well developed eye spots.

New colonies are produced within the parent colonies during asexual reproduction.
Only certain cells at the posterior end of the colony take part in the asexual reproduction.
The size of these cells increases. They become ten times larger. These cells are called gonidia.
Gonidia develop numerous pyrenoids.
There are 5 — 20 gonidia in each colony. They produce daughter colony within the parent colony.

Sexual reproduction is oogamous in volvox. Colony may be homothallic or heterothallic. Asexually produced daughter colonies are absent in sexually producing colonies. The reproductive cells are called gametangia. Gametangia are present in the posterior pole of colony. These cells are larger than the vegetative cells. Gametangia withdraw their flagella.

The male gametangia are called antheridium. The protoplast of antheridium divides many times. It produces 16-128 cells. These cells called antherozoid. Antherozoids are elongated and fusiform.

They develop flagellum at pointed ends. Antherozoids have two types of cycles:

a)        128 or less than 128: In this case, all the antherozoids are librated in the form of mass of cells. This mass swims and reaches near the oogonium. Then the antherozoid gets separated.

b)        More than 128: In this case, antherozoids are arranged in a hollow sphere within the antheridium. They undergo inversion. Then antherozoids separate from each other. Then they arc liberated.

Then female sex organ are oogonia. Oogonium is enlarged globular cell. The protoplast of oogonium is changed into single oosphere. Ooshere is large and rounded in shape.

An aperture is produced in the wall of oogonium. Antherozoids enter into oogonium through this pore. Only one antherozoid unites with the egg and zygote is formed. Zygote secretes a thick wall and become oospore. The wall of oospore is three layered. Oospore produces a large amount of heamotochrome. So its colour becomes orange red.

The parent body disintegrates and release oospore.
Oosphere germinates in favourable conditions. First division is meiosis. Oosphere has three walls: exospore, mesospore and endospore. Exposure and mesospore ruptures. The endospore protrudes out in the form of vesicle. Proplast of oospore migrates into these vesicles. This protoplast develops new colony. 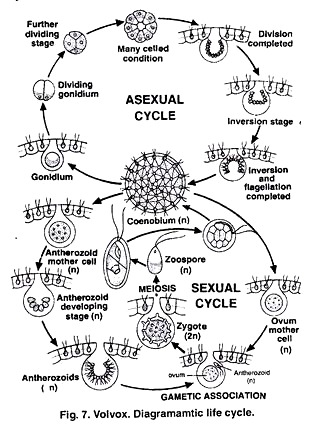