Let’s look at the pedigrees of disorders caused by rare recessive alleles of genes located on the X chromosome. Such pedigrees typically show the following features:

2. None of the offspring of an affected male show the phenotype, but all his daughters are “carriers,” who bear the recessive allele masked in the heterozygous condition. In the next generation, half the sons of these carrier daughters show the phenotype.

3. None of the sons of an affected male show the phenotype under study, nor will they pass the condition to their descendants. The reason behind this lack of male-to-male transmission is that a son obtains his Y chromosome from his father; so he cannot normally inherit the father’s X chromosome, too. Conversely, male-to-male transmission of a disorder is a useful diagnostic for an autosomally inherited condition.

Perhaps the most familiar example of X-linked recess ive inheritance is red–green colour blindness. People with this condition are unable to distinguish red from green. The genes for colour vision have been characterized at the molecular level. Colour vision is based on three different kinds of cone cells in the retina, each sensitive to red, green, or blue wavelengths. The genetic determinants for the red and green cone cells are on the X chromosome. Red–green colour-blind people have a mutation in one of these two genes. As with any X-linked recessive disorder, there are many more males with the phenotype than females. 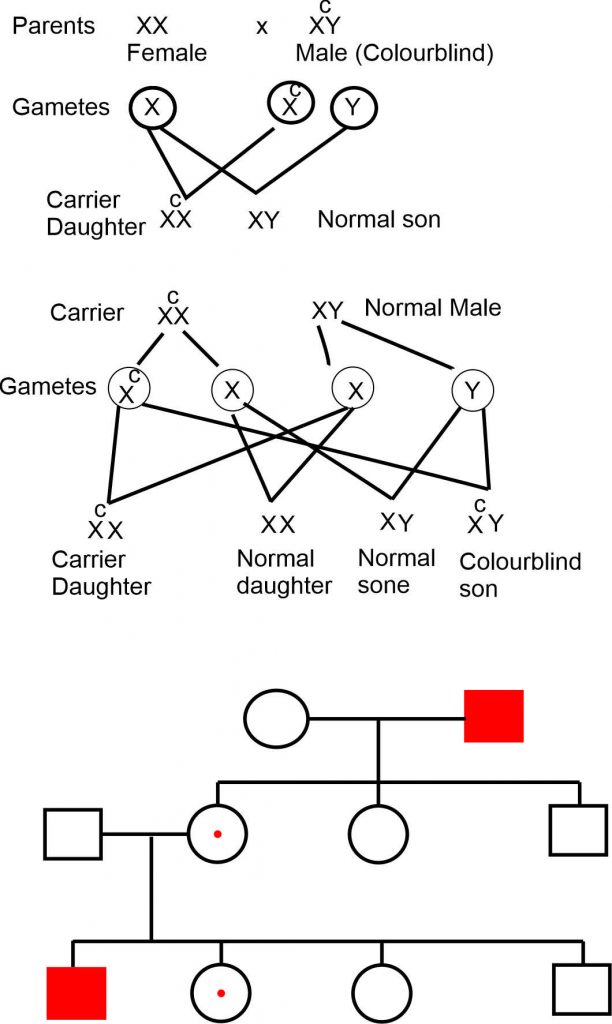 Another familiar example is hemophilia, the failure of blood to clot. Many proteins act in sequence to make blood clot. The most common type of hemophilia is caused by the absence or malfunction of one of these clotting proteins, called factor VIII. A well-known pedigree of hemophilia is of the interrelated royal families in Europe. The original hemophilia allele in the pedigree possibly arose spontaneously as a mutation in the reproductive cells of either Queen Victoria’s parents or Queen Victoria herself. However, some have proposed that the origin of the allele was a secret lover of Victoria’s mother. Alexis, the son of the last czar of Russia, inherited the hemophilia allele ultimately from Queen Victoria, who was the grandmother of his mother, Alexandra. Nowadays, hemophilia can be treated medically, but it was formerly a potentially fatal condition. It is interesting to note that the Jewish Talmud contains rules about exemptions to male circumcision clearly showing that the mode of transmission of the disease through unaffected carrier females was well understood in ancient times. For example, one exemption was for the sons of women whose sisters’ sons had bled profusely when they were circumcised. Hence, abnormal bleeding was known to be transmitted through the females of the family but expressed only in their male children. 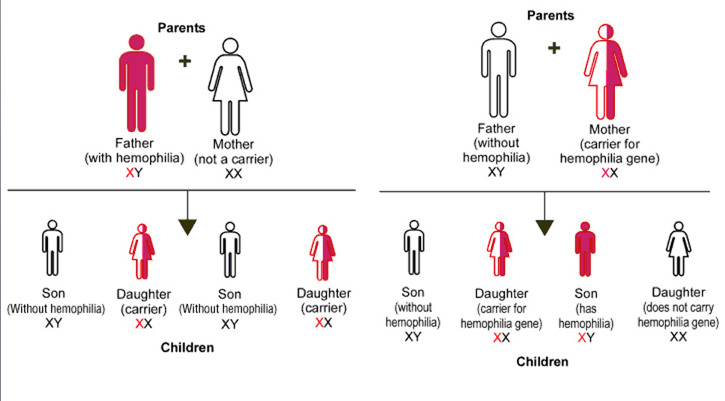 Duchenne muscular dystrophy is a fatal X-linked recessive disease. The phenotype is a wasting and atrophy of muscles. Generally, the onset is before the age of 6, with confinement to a wheelchair by age 12 and death by age 20. The gene for Duchenne muscular dystrophy encodes the muscle protein dystrophin. This knowledge holds out hope for a better understanding of the physiology of this condition and, ultimately, a therapy. 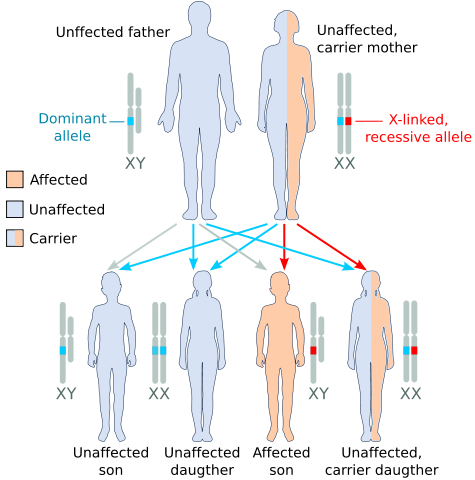 A rare X-linked recessive phenotype that is interesting from the point of view of sexual differentiation is a condition called testicular feminization syndrome, which has a frequency of about 1 in 65,000 male births. People with this syndrome are chromosomally males, having 44 autosomes plus an X and a Y chromosome, but they develop as females. They have female external genitalia, a blind vagina, and no uterus. Testes may be present either in the labia or in the abdomen. Although many such persons marry, they are sterile. The condition is not reversed by treatment with the male hormone androgen, and so it is sometimes called androgen insensitivity syndrome. The reason for the insensitivity is that a mutation in the androgen-receptor gene causes the receptor to malfunction, and so the male hormone can have no effect on the target organs that contribute to maleness. In humans, femaleness results when the male-determining system is not functional.