Gibberellins are members of a large and varied family of plant constituents known as the terpenoids. Terpenes are normally recognized on the basis of their chemical structure, which may be dissected into one or more 5-carbon isoprene units.

Gibberellins are thus biosynthetically related to the carotenoid pigments, sterols, latex, and other isoprene.

Gibberellins are noted for their capacity to stimulate hyper-elongation of intact stems, especially in dwarf plants and rosettes. They are also prominently involved in seed germination and mobilization of endosperm reserves during early embryo growth, as well as leaf expansion, pollen maturation, ﬂowering, and fruit development.

Gibberellins is a large group of compounds

Gibberellins are a large class of molecules. Infact,more than 135 have now been identiﬁed in higher plants and fungi and additional members are added almost every year. Only a few of these are biologically active in their own right. The others are either intermediates in the biosynthetic pathway or products of inactivation.

It is generally accepted that there are three principal sites of gibberellin biosynthesis:

(2) the young leaves of developing apical buds and elongating shoots, and

(3) the apical regions of roots.

Although gibberellins did not become known to American and British scientists until the 1950s, they had been discovered much earlier by Japanese scientists. Rice farmers in Asia had long known of a disease that makes the rice plants grow tall but eliminates seed production. In Japan this disease was called the “foolish seedling,” or bakanae, disease.

Plant pathologists investigating the disease found that the tallness of these plants was induced by a chemical secreted by a fungus that had infected the tall plants. This chemical was isolated from filtrates of the cultured fungus and called gibberellin after Gibberella fujikuroi, the name of the fungus.

In the 1930s Japanese scientists succeeded in obtaining impure crystals of two fungal growth-active compounds, which they termed gibberellin A and B, but because of communication barriers and World War II, the information did not reach the West.

Not until the mid-1950s did two groups—one at the Imperial Chemical Industries (ICI) research station at Welyn in Britain, the other at the U.S. Department of Agriculture (USDA) in Peoria, Illinois—succeed in elucidating the structure of the material that they had purified from fungal culture filtrates, which they named gibberellic acid: 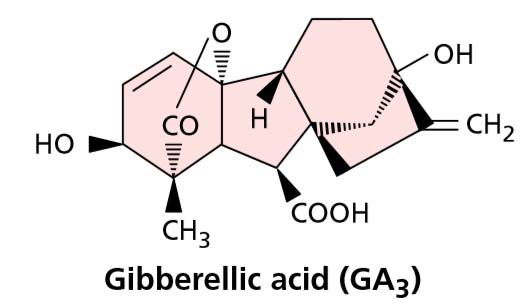 EFFECTS OF GIBBERELLIN ON GROWTH AND DEVELOPMENT

Though they were originally discovered as the cause of a disease of rice that stimulated internode elongation, endogenous gibberellins influence a wide variety of developmental processes.

Applied gibberellin promotes internodal elongation in a wide range of species. Exogenous GA3 causes such extreme stem elongation in dwarf plants that they resemble the tallest varieties of the same species. Accompanying this effect are a decrease in stem thickness, a decrease in leaf size, and a pale green color of the leaves.

Some plants assume a rosette form in short days and undergo shoot elongation and flowering only in long days. Gibberellin application results in bolting (stem growth) in plants kept in short days.

Fig:  Cabbage, a long-day plant, remains as a rosette in short days, but it can be induced to bolt and flower by applications of gibberellin. In the case illustrated, giant flowering stalks were produced.

many long-day rosette plants have a cold requirement for stem elongation and flowering, and this requirement is overcome by applied gibberellin.

GA also promotes internodal elongation in members of the grass family. The target of gibberellin action is the intercalary meristem—a meristem near the base of the internode that produces derivatives above and below.

Although stem growth may be dramatically enhanced by GAs, gibberellins have little direct effect on root growth. However, the root growth of extreme dwarfs is less than that of wild-type plants, and gibberellin application to the shoot enhances both shoot and root growth.

6. Gibberellins Regulate the Transition from Juvenile to Adult Phases

Many woody perennials do not flower until they reach a certain stage of maturity; up to that stage they are said to be juvenile.

In plants where flowers are unisexual rather than hermaphroditic, floral sex determination is genetically regulated.

However, it is also influenced by environmental factors, such as photoperiod and nutritional status, and these environmental effects may be mediated by gibberellin

In maize, for example, the staminate flowers (male) are restricted to the tassel, and the pistillate flowers (female) are contained in the ear.

Exposure to short days and cool nights increases the endogenous gibberellin levels in the tassels 100-fold and simultaneously causes feminization of the tassel flowers.

Application of exogenous gibberellic acid to the tassels can also induce pistillate flowers.

Applications of gibberellins can cause fruit set (the initiation of fruit growth following pollination) and growth of some fruits, in cases where auxin may have no effect. For example, stimulation of fruit set by gibberellin has been observed in apple (Malus sylvestris).

Seed germination may require gibberellins for one of several possible steps: the activation of vegetative growth of the embryo, the weakening of a growth-constraining endosperm layer surrounding the embryo, and the mobilization of stored food reserves of the endosperm.

Some seeds, particularly those of wild plants, require light or cold to induce germination. In such seeds this dormancy can often be overcome by application of gibberellin.

Following are the important commercial applications of Gibberellins.

Amajor use of gibberellins is to increase the stalk length of seedless grapes. Because of the shortness of the individual fruit stalks, bunches of seedless grapes are too compact and the growth of the berries is restricted. Gibberellin stimulates the stalks to grow longer, thereby allowing the grapes to grow larger by alleviating compaction, and it promotes elongation of the fruit. 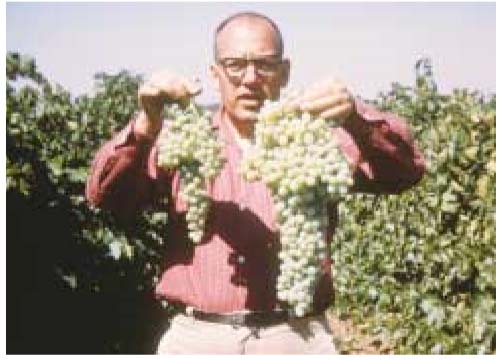 In citrus fruits, gibberellins delay senescence, allowing the fruits to be left on the tree longer to extend the market period.

Malting is the first step in the brewing process. During malting, barley seeds (Hordeum vulgare) are allowed to germinate at temperatures that maximize the production of hydrolytic enzymes by the aleurone layer. Gibberellin is sometimes used to speed up the malting process. The germinated seeds are then dried and pulverized to produce “malt,” consisting mainly of a mixture of amylolytic (starch-degrading) enzymes and partly digested starch.

Sugarcane (Saccharum officinarum) is one of relatively few plants that store their carbohydrate as sugar (sucrose) instead of starch (the other important sugar-storing crop is sugar beet).

Spraying the crop with gibberellin can increase the yield of raw cane by up to 20 tons per acre, and the sugar yield by 2 tons per acre. This increase is a result of the stimulation of internode elongation during the winter season.