Whereas plants and animals form genuine tissues by their ability to perform cell divisions in all directions, fungi are limited by their growth as one-dimensional hyphae. None the less, fungi are capable of producing complex and characteristic multicellular structures which resemble the tissues of other eukaryotes. Further, instead of spacing themselves apart as during invasive growth, hyphae must be made to aggregate.

The formation of aggregates of parallel, relatively undifferentiated hyphae is quite common in the Basidiomycota and in some Ascomycota. For instance, mycelial strands form the familiar ‘spawn’ of the cultivated mushroom Agaricus bisporus.

In contrast to mycelial strands or cords which consist of relatively undifferentiated aggregations of hyphae and are produced by a great variety of fungi, rhizomorphs are found in only relatively few species and contain highly differentiated tissues.

Rhizomorph, a threadlike or cordlike structure in fungi (kingdom Fungi) made up of parallel hyphae, branched tubular filaments that make up the body of a typical fungus. Rhizomorphs act as an absorption and tran

slation organ of nutrients.
Well-known examples of rhizomorph-forming fungi are provided by Armillaria spp.  which are serious parasites of trees and shrubs.

Sclerotia are pseudoparenchymatous aggregations of hyphae embedded in an extracellular glucan matrix. A hard melanized rind may be present or absent. Sclerotia serve a survival function and contain intrahyphal storage reserves such as polyphosphate, glycogen, protein, and lipid.  Sclerotia may also have a reproductive role and are the only known means of reproduction in certain species. Sclerotia can survive for long periods, sometimes for several years. Germination may take place in three ways  by the development of mycelium, asexual spores (conidia) or sexual fruit bodies (ascocarps or basidiocarps). 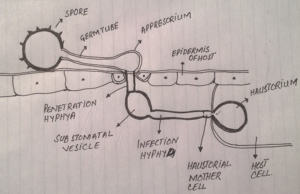 The hyphae of many plant pathogenic fungi e.g. certain Uredinales, Glomerella develop special structures for attachment to the host in the early stages of infection; these are called appressoria (L. Apprimere= to press against). they are localized swellings of the tips of germ tubes or of older hyphae that develop in response to contact with the host. From these a minute infection peg usually grows and enters the epidermal cell of the host.

These are lateral outgrowths of intercellular hyphae (or superficial hyphae in powdery mildews) specially modified for absorption of nutrients. These are present in most of biotrophs and some facultative parasites. Haustoria are of various shapes and sizes ranging from knob like structures, to simple, lobed, branched, coiled or coralloid hyphae. They may be small and rather insignificant or extensive and almost fill the host cell.

These are the modifications of hyphae in predacious fungi for the capture of small animals, protozoa, rotifers and nematodes. Some of these fungi belong to Zygomycetes, but majority of them are Fungi-Imperfecti.
There are mainly two types of predacious activity; capture by adhesion and capture by mechanical traps.

No special structures are present the fungi relay on the production of a sticky substance on which the victims are held e.g. Harposporium, Meria,

Mechanical traps are formed in Dactylaria candida.  A mechanical trap consists of a ring of three cells bone on a lateral branch which swells to about three times of its original volume on coming in contact with prey.

Some fungi especially animal pathogens, can exist either in the filamentous or unicellular form. this phenomenon is termed as dimorphism. In infected tissues dimorphic fungi exists in unicellular form and reproduce by budding (like yeast) but become mycelial in their saprotrophytic growth in culture as in Blastomyces

Mycelium and tissues in fungi