The term sclerenchyma refers to a tissue composed of cells with secondary walls, often lignifi ed, whose principal function is mechanical or support. These cells are supposed to enable plant organs to withstand various strains, such as may result from stretching, bending, weight, and pressure without undue damage to the thinwalled softer cells. The word is derived from the Greek skleros, meaning “hard” and enchyma, an infusion; it emphasizes the hardness of sclerenchyma walls. The individual cells of sclerenchyma are termed sclerenchyma cells. 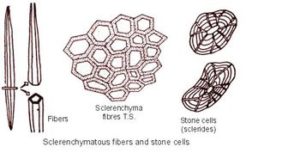 Sclerenchyma cells are usually divided into two categories, fibers and sclereids. Fibers are described as long cells, and sclereids as relatively short cells. Sclereids, however, may grade from short to conspicuously elongated, not only in different plants but also in the same individual. The fibers, similarly, may be shorter or longer. Sclereids are generally thought of as having more conspicuous pitting in their walls than fibers, but this difference is not constant. Sometimes the origin of the two 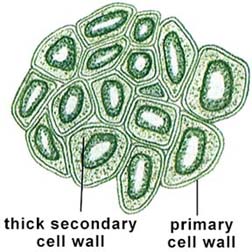 categories of cells is considered to be the distinguishing characteristic: sclereids often are said to arise through secondary sclerosis of parenchyma cells, fibers from meristematic cells that are early determined as fibers