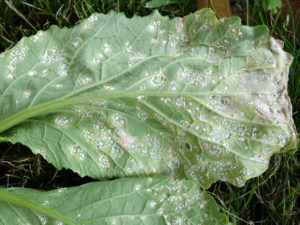 White rust is a common but usually not serious disease. It is characterized by both local and systemic symptom expression. Local infection appears as pustules or “blisters” filled with sporangia on leaves, smaller stems, and floral parts. Pustules measure approximately 1 to 2 mm in diameter and are white or creamy yellow. Systemic infections result in abnormal growth, distortion, and sterility of flowers or inflorescences. These abnormalities (or hypertrophy) are known as stagheads and consist mostly of thick-walled oospores.

To date, seven distinct A. candida races are known based on susceptibility to 7 different host species, with each species susceptible to its own specific race. Young seedlings, without fully expanded cotyledons, usually are susceptible to all races while older plants usually are race specific. Most of the Albugo candida races have a broad host range. In a study in which 115 varieties of 10 Brassica species were inoculated with A. candida race 1 (from Raphanus sativus) and 2 (isolated from B. juncea), all varieties but one showed some degree of susceptibility to one or both races. Cultivars within species varied in susceptibility to both pathogenic races.

Sporangia are produced in pustules and once liberated, are dispersed by wind, rain, or insects to neighboring plants. The sporangia require some drying in order to germinate well. Each germinating sporangium gives rise to five to seven zoospores. The preferred temperature for germination ranges from 1 to 18 ºC, but is optimum between 10 ºC and 14 ºC. Temperatures should be between 16 ºC and 25 ºC, with the optimum at 20 ºC for zoospores to produce germ tubes and penetrate plant tissue. The moisture necessary for zoospore activity is ideal when in the form of heavy dew or fog or during periods of extended rainfall and lower temperatures.

When systemic infection of inflorescences occurs, stagheads containing numerous thick-walled oospores are produced resulting in serious losses in seed yield. Formation of stagheads is favored when the environmental conditions include little sunlight (2-6 hours per day) and extended rainfall (up to 161 mm) during the flowering period.
Oospore germination occurs in one of three ways:

1) production of a sessile vesicle,

2) an exit tube with a terminal vesicle,

The most common type of germination (approximately 70% of the time) is the production of a sessile vesicle, which releases 40 to 60 zoospores. Germination can be increased in vitro by “washing” oospores with water in flasks on a rotary shaker. This method is consistent with the general observation that germination is enhanced by the leaching action in spring water from melting snow or rain showers in more temperate climates.

There is some evidence of heterothallism in A. candida. One study examined the pathogen on a host species and noticed that primary infections were sterile but became fertile when secondary infections were established. The hypothesis that isolates of Albugo are self-sterile, but fertile when they interact with a compatible isolate, was supported by (the) observation that oospore production in Albugo is frequently correlated with a secondary infection by the related pathogen, Peronospora parasitica. It is believed that Peronospora parasitica stimulates gametangium formation in Albugo, and subsequent oospore formation by selfing.

Oospore contaminated seeds and zoospore infected flower buds perhaps are the most important sources of primary infection of white rust. In the laboratory, inoculation of cotyledons and leaves produce few stagheads, while inoculations of flower buds result in approximately 55% infection. In the field, flower buds may be infected in one of two ways, by infested seeds where the pathogen develops systemically or by infection by sporangia from other plants. Oospores on seeds are able to survive for a long period of time when kept dry, but do not survive as long in the soil. In one study oospores could not be recovered from white rust infested fields six months after harvest. This study examined infected plant debris in the soil and buried hypertrophied host tissue, suggesting that oospores in field soils are not a primary source of infection for the next crop. 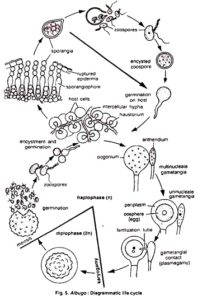 White rust is spread through oospore contaminated seeds, wind and rain borne zoosporangia, and possibly perennial mycelium in infected plants. Non-cruciferous weeds are not believed to serve as sources of inoculum.

Resistance has been successfully deployed with mustard and rutabaga, however, with Asian vegetables such as Chinese mustard, Chinese cabbage, pak choi, and diakon, resistant varieties have not yet been identified.

The development of the acylalanine fungicide metalaxyl (Ridomil; Subdue) greatly improved the ability to control while rust with fungicide application. Metalaxyl provides limited curative activity and some control of systemic infection.

Applications should be made to the soil and subsequently applied to the foliage. Frequency of application would vary according to the length of crop and amount of rainfall experienced. In temperate environments a soil application and a minimum of 1-2 foliar applications during the crop cycle is suggested.

With the possibility of developing fungicide tolerant pathogen strains associated with metalaxyl, growers should consider using Ridomil MZ58 formulations with foliar fungicide applications. This formulation adds a second fungicide to the tank mix.