The cytokinins were discovered in the search for factors that stimulate plant cells to divide (i.e., undergo cytokinesis). Since their discovery, cytokinins have been shown to have effects on many other physiological and developmental processes, including leaf senescence, nutrient mobilization, apical dominance, the formation and activity of shoot apical meristems, floral development, the breaking of bud dormancy, and seed germination.

The discovery of cytokinins came about because plant cells in culture would not divide.The ﬁrst experimental evidence for chemical control of plant cell division was provided by Haberlandt in 1913, when he demonstrated that phloem sap could cause non dividing, parenchymatous potato tuber tissue to revert to an actively dividing meristematic state. Other cell-division factors were later demonstrated in wounded bean pod tissue, extracts of Datura ovules, and the liquid (milky) endosperm of coconut.

then working as a postdoctoral student in Skoog’s laboratory, took on the task of isolating the active material. Miller was able to provisionally identify the active material as a adenine, one of the nitrogenous bases found in nucleic acids.

This led to a search for active material in nucleic acid preparations, a source high in adenine. In a beautiful piece of serendipity, Miller sampled a bottle of herring sperm DNA which had been sitting on the laboratory shelf. The sample proved to be highly active, so a fresh supply of herring sperm DNA was ordered.

Unfortunately, the fresh sample proved to becompletely inactive. It turns out that the active principle in the original DNA sample had slowly accumulated as the DNA aged on the laboratory shelf. Activity could be generated in fresh DNA samples simply by artiﬁcially ‘‘aging’’ the sample with heat and acid.

In 1965, Skoog and his colleagues proposed the term cytokinin. Even though kinetin remains one of the most biologically active cytokinins, it is an artifact of isolation from DNA and has not been found in plants. However, the discovery of kinetin and its dramatic effect on cell division stimulated physiologists to look for naturally occurring cytokinins.

In the early 1960s, Miller, then at Indiana University, and D. S. Letham, working in Australia, independently reported the isolation of a purine with kinetin like properties from young, developing maize seed and plum fruitlets. This substance was characterized as 6-(4-hydroxy-3-methyl-trans-2-butenylamino) purine, which was given the trivial name zeatin. Since the discovery of zeatin, a number of other naturally occurring cytokinins have been isolated and characterized. 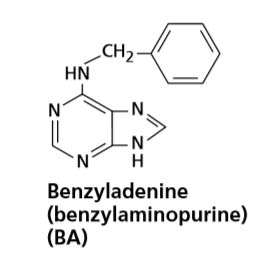 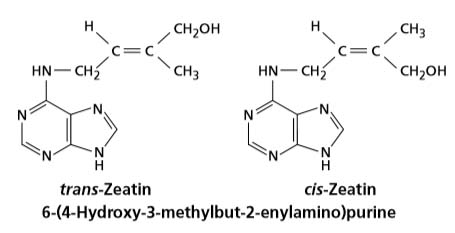 A major site of cytokinin biosynthesis in higher plants is the root. High cytokinin levels have been found in roots, especially the mitotically active root tip, and in the xylem sap of roots from a variety of sources.

Although discovered as a cell division factor, cytokinins can stimulate or inhibit a variety of physiological, metabolic, biochemical, and developmental processes when they are applied to higher plants, and it is increasingly clear that endogenous cytokinins play an important role in the regulation of these events in the intact plant.

(i) Cell Division in Shoots and Roots

Cell proliferation occurred only when auxin plus some‘‘cell-division factor’’was present in the medium.The‘‘cell division factor’’turned out,of course, to be kinetin. It was soon learned that kinetin and other cytokinins, always in the presence of auxin, stimulated cell division in a wide variety of tissues. The signiﬁcance of these studies was that no cambium or other meristematic tissue was present in the cultures, therefore demonstrating that cytokinins have the capacity to initiate division in quiescent, or non dividing, cells.

At present,there are three lines of evidence indicating a role for cytokinins as inhibitors of senescence.

First is the observation that exogenous application of cytokinin to detached leaves will delay the onset of senescence,maintain protein levels, and prevent chlorophyll breakdown.

The second line of evidence consists of correlations between endogenous cytokinin content and senescence.

For example, detached leaves that have been treated with auxin to induce root formation at the base of the petiole will remain healthy for weeks. In this case, the growing root is a site of cytokinin synthesis and the hormone is transported through the xylem to the leaf blade. If the roots are continually removed as they form, senescence of the leaf will be accelerated. 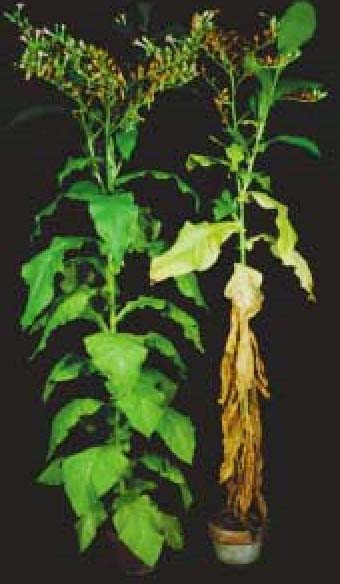 Fig:  Leaf senescence is retarded in a transgenic tobacco plant containing a cytokinin biosynthesis gene, ipt. The ipt gene is expressed in response to signals that induce senescence. (From Gan and Amasino 1995, courtesy of R. Amasino

Cytokinins have role in develoment of lateral roots and inhibit the elongation of primary root.

Cytokinins cause the movement of nutrients towards the area where they are present.  When applied to lateral buds, they help in their growth despite the presence of apical bud. They thus act antagonistically to auxin which promotes apical dominance.

Although apical dominance may be determined primarily by auxin, physiological studies indicate that cytokinins play a role in initiating the growth of lateral buds. For example, direct applications of cytokinins to the axillary buds of many species stimulate cell division activity and growth of the buds.

Like gibberellins, they overcome seed dormancy of various types, including red light requirement of lettuce and tobacco seeds.

Like auxins and ethylene, cytokinins promote femaleness in flowers.

Shortly after the discovery of kinetin, it was observed that the differentiation of cultured callus tissue derived from tobacco pith segments into either roots or shoots depends on the ratio of auxin to cytokinin in the culture medium.

Whereas high auxin:cytokinin ratios stimulated the formation of roots,

low auxin:cytokinin ratios led to the formation of shoots.

In moss (Funaria, Polytrichum) the leafy gametophyte develop from protonema (algal filament like structure developed by the germination of spores). Buds arise in protonema from where the gametophyte germinate. Cytokinins improves the formation of bud in protonema. Cytokinin not only stimulates normal bud development; it also increases the total number of buds.

Instead of maturing as chloroplasts, the proplastids of dark-grown seedlings develop into etioplasts, which do not synthesize chlorophyll.

If the etiolated leaves are treated with cytokinin before being illuminated, they form chloroplasts with more extensive grana, and chlorophyll and photosynthetic enzymes are synthesized at a greater rate upon illumination