THE DISCOVERY OF ABSCISIC ACID

As more investigators became interested in plant hormone research, it soon became evident that ether extracts of plant material—used to extract auxins—frequently contained substances that interfered with the auxin response in the Avena coleoptile curvature test. Initially, the principal interest of investigators was to rid extracts of these interfering substances. As time went on, however, interest turned toward the possibility that these inhibitors might themselves be growth regulators in their own right. The advent of paper chromatography as an analytical tool made it possible to achieve better separation of the various substances in crude extracts.

reported that plant extracts contained, in addition to IAA, a substance that inhibited growth of coleoptile sections, which they called inhibitor β. The observation that large amounts of inhibitor β could be isolated from axillary buds and the outer layer of dormant potato tuber led Kefford to suggest that it was involved in apical dominance and maintaining dormancy in potatoes.

Proposed the term ‘‘dormin’’ for these endogenous, dormancy-inducing substances. In another line of study, substances that accelerated abscission were isolated from senescing leaves of bean and from cotton and lupin fruits.These substances would accelerate abscission when applied to excised abscission zones and were called ‘‘abscission II.’’ T

hese several lines of study came to a head in the mid-1960s when three laboratories independently reported the puriﬁcation and chemical characterization of abscisin II, inhibitor β, and dormin. All three substances proved to be chemically identical.

The name abscisic acid and abbreviation ABA were recommended by this panel to the 1967 International Conference on Plant Growth Substances,which met in Ottawa. The recommendation was accepted by the Conference and the term abscisic acid is now in universal use.

Site of synthesis in plants

ABA is synthesized in mesophyll, guard cells and vascular tissues. 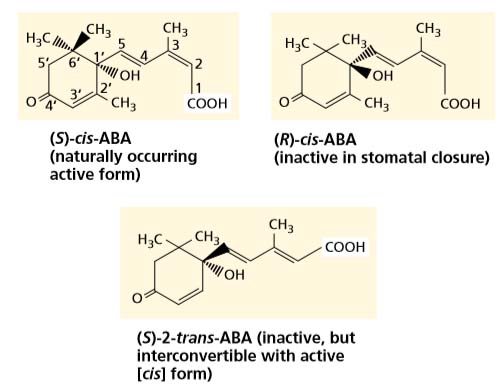 Abscisic acid induces dormancy of buds towards the approach of winter.

It is mainly caused by abscisic acid. Dormancy allows seeds to tolerate desiccation and high

temperature. Because of its action in inducing dormancy, abscisic acid or ABA is also named as dormin.

2. Mechanical constraint. The first visible sign of germination is typically the radicle breaking through the seed coat. In some cases, however, the seed coat may be too rigid for the radicle to penetrate. For the seeds to germinate, the endosperm cell walls must be weakened by the production of cell wall–degrading enzymes.

3. Interference with gas exchange. Lowered permeability of seed coats to oxygen suggests that the seed coat inhibits germination by limiting the oxygen supply to the embryo.

5. Inhibitor production. Seed coats and pericarps may contain relatively high concentrations of growth inhibitors, including ABA, that can suppress germination of the embryo.

The second type of seed dormancy is embryo dormancy, a dormancy that is intrinsic to the embryo and is not due to any influence of the seed coat or other surrounding tissues.

Embryo dormancy is thought to be due to the presence of inhibitors, especially ABA, as well as the absence of growth promoters, such as GA(gibberellic acid). The loss of embryo dormancy is often associated with a sharp drop in the ratio of ABA to GA.

It stops mitosis in vascu­lar cambium towards the approach of winter.

Its excessive presence stops protein and RNA synthesis in the leaves and hence stimulates their senescence (leaf fall is actually promoted by ethylene).

During desiccation and other stresses, abscisic acid is rapidly synthesized. The inhibitor causes closure of stomata and hence prevents transpiration. Stomatal closing can also be caused by ABAsynthesized in the roots and exported to the shoot. ABAconcentrations in leaves can increase up to 50 times under drought conditions—the most dramatic change in concentration reported for any hormone in response to an environmental signal.

Abscisic acid increases resistance of plants to cold and other types of stresses. It is, therefore, also known as stress hormone.

ABA has been found to induce parthenocarpic development in Rose.

Rooting of stem cuttings is promoted in some cases by abscisic acid, e.g., Bean, Ivy.

It is antagonist to gibberellins and counteracts the effect of other growth promoting hormones (auxins and cytokinins) and therefore, keeps their activity under check. By controlling growth, ABA plays an important role in seed development and seed maturation. Normally it inhibits seed germination, growth of excised embryos, growth of duckweed and other plants.

Application of minute quantity of abscisic acid to leaves shall reduce transpiration to a great extent through partial closure of stomata. It conserves water and reduces the requirement of irrigation. Photosynthesis is reduced to a lesser extent (Transpiration 56%: photosynthesis  14%).

It is useful in introducing flowering in some short day plants kept under un-favourable photoperiods.

Use of abscisic acid promotes rooting in many stem cuttings.

Abscisic acid can be used in prolonging dormancy of buds, storage organs and seeds.